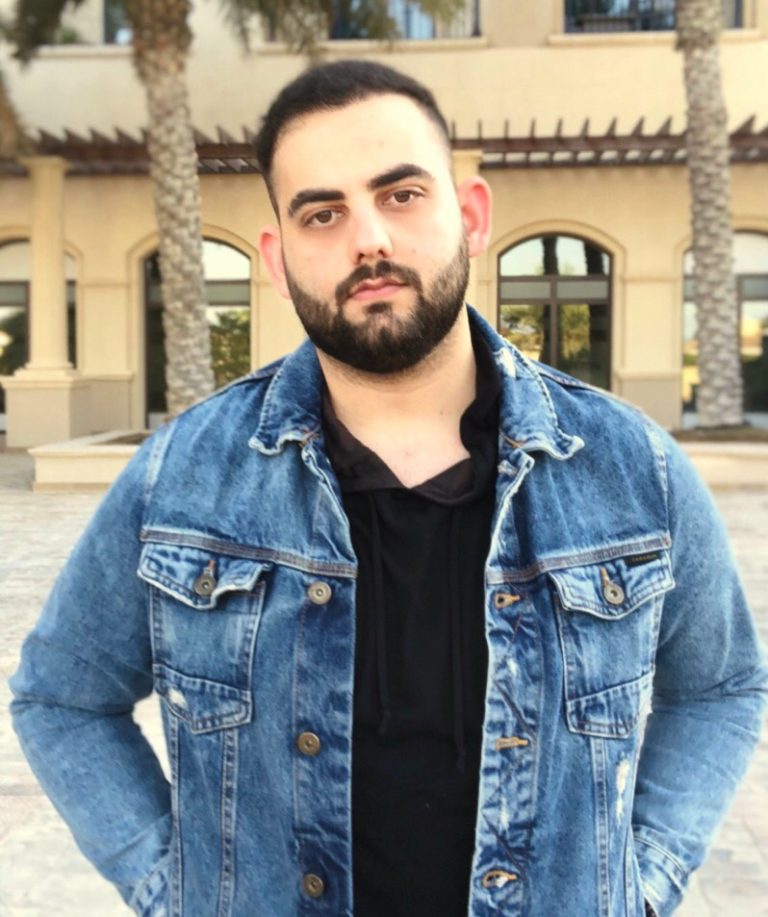 Ahmed Najdat has been a multimedia producer for Sky News Arabia in Abu Dhabi since February 2017. Najdat interned at CBC in Toronto and, after graduating UBC Journalism in 2016, was one of the first columnists to write for the broadcaster’s new opinion page. He was also a student in the International Reporting Program and travelled to Chile to contribute to the project Hidden In Plain Sight.

I’m like an octopus. My main job is writing and packaging international stories from reporters and news agencies like Reuters and Associated Press. I also produce social videos, which use text and moving images. I choose the topic, the content, the visuals. I find a lot of creativity in that.

I had lived in the United Arab Emirates before, but never worked here as a journalist. I was educated in English, so when I came back to do journalism in Arabic, I evolved. I grew to understand how a newsroom in this region works.

What drew you to UBC Journalism?

I first started in Dubai and studied architecture for a year. It seemed stable and I was good at designing and drawing.  But I didn’t love it. Then my family immigrated to Canada and I had to start school all over.

I realized I didn’t want to pursue architecture. I wanted do something that I loved. I did my undergrad in communications and media at the University of Windsor. A lot of it was theory and film production, but I didn’t want to go into film. I was good at writing, even in Arabic. I had started writing for magazines as a teenager. I wanted something that gave me a clear path and I realized that was journalism.

Vancouver looked like a fascinating place. I had never been to the West Coast. That attracted me. I also read about UBC Journalism’s International Reporting Program, which looked magical. There were other hands-on experiences, like the Reporting in Indigenous Communities course. I didn’t feel that with other journalism schools.

What was the highlight of your time at the school?

Travelling to Chile for the International Reporting Program. My classmates and I had a very strong bond. The chemistry was high. We reported all day, slept late, woke up at 6 a.m. It was such an adrenaline rush. Everyone had a role in the field. I was the camera guy and dealt with a lot of pressure. All the gear had to be with me. I had to be ready 24/7. It gave me to confidence to perform in intense situations.

Our project turned into two stories. We first went to cover the HIV crisis in Chile. While in the field, my classmate and I realized that Chile was also facing a migrant crisis. We discussed it with the VICE producers, who were working with us in the field. We told them we thought there was potential for a second documentary. They loved the idea.

One of the most powerful moments was when we attended a support group for people with HIV. We sat in a circle. One of the men spoke about the challenges he faced as an HIV-positive person. He started crying next to me. I put my hand on him and told him, ‘Don’t worry, we’re here for you.’ A wave of positivity came over the circle. That’s a moment I will never forget.

I understand you love soccer. How did you turn that into a thesis?

Soccer is an obsession. I wanted a thesis to get the full UBC Journalism experience. I started looking at why is Canada doing so bad in men’s soccer. I got to speak with so many people, including kids with shattered dreams. I produced some videos and got it published. It was such a great project. I enjoyed working with my advisor, Steve Woodward. He basically let me do it my way and helped me fix the edges.

You were educated in English, but Arabic was your first language. Was that a challenge when you started at UBC?

I was a little scared when I first came in, to be honest. And then I just realized I could make mistakes and the professors would tell me what’s wrong and push me to do what’s right.

I’ve always believed in challenging myself. I’m not going to be the best person to write stories or to write articles, because there will be people who are better than me. But at the end of the day, journalism is not just about writing or speaking great English.

We had a lot of international students our year. Many of them were really successful. You have nothing to lose.

How did you take what you learned about media in Canada and apply it to another country’s media?

The core principles are still the same. In Canada, I was finding local stories that I found interesting. But now, I’m covering stories in Syria or Yemen — big news items that I have to package in a compelling way. It’s a different kind of journalism.

It’s the best place to study journalism in Canada. Vancouver is such a vibrant city to start your career in. And the beauty of journalism is that it takes you places. It widens your horizon. You can be whoever you want to be.