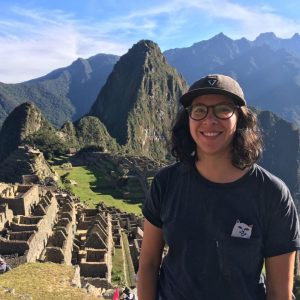 Aurora Tejeida graduated from the UBC Master of Journalism program in 2014 after traveling north from Mexico City, where she studied communications. She now works as a communications coordinator with the Peter Wall Institute.

At the school, her reporting focused on stories from Indigenous communities and from young people. She spent a term making  regular visits to Squamish Nation in North Vancouver, completed a short thesis on cell phone networks for Indigenous communities in Oaxaca, Mexico, and traveled to two provinces in China to spotlight an up-and-coming generation committed to tackling the nation’s pollution.

What led you to journalism school?

I was already working part-time at a newspaper in Mexico City. I was covering the local arts beat and transferring stories from the print paper to its website. I had been thinking for a while that I wanted to do a masters in journalism and what ended up sealing the deal for me with UBC was their Reporting in Indigenous Communities class. At the time, I think it was one of two universities in all North America that I could find with a course like that.

Tell us more about your experience in RIIC.

I had such a great experience. Duncan [McCue] is an amazing instructor. My reporting partner and I ended up doing a story on the North Vancouver Canoe Club, which was headed by a man named Mike Billy, who comes from a long line of canoe carvers. He had started the club to get back into the tradition of building canoes, and as a way to bring young people into the canoe culture. And so we would go there almost every weekend for a month or two and hang out with them, chat with them, go out on the water… And one time, they asked us if we could bring a few extra people to get enough people to take out this 100-year-old, 10-person canoe. And it was so cool. It felt really special to be included in that and hear all their stories.

I knew [reporting in Indigenous communities] was something I wanted to focus on a bit more, in part because growing up in Mexico, Indigenous communities are severely under-represented in media. There are very few Indigenous reporters. My thesis project was about a community-owned and operated cell phone network in Oaxaca. Indigenous villages in the Oaxacan highlands had partnered with a non-profit and set up their own cell phone network. I spent some time in Oaxaca. The story was about self determination and autonomy but also about their needs not being met by big telecommunication companies. And there’s a lot of stuff I would have liked to further explore, especially around community radio which is the most used form in journalism in the region, particularly within Indigenous communities. And it’s heavily policed and shut down by the government all the time.

What else did you get up to in the program?

I worked on China’s Generation Green project. We went to Shanghai and Chengdu. My part of it focused on domestic consumption — or growing consumerism in China and this person who was trying to make people more aware of the environment.

I also did my summer internship at The Tyee and we were working on a big project that had a lot of one-on-ones with Dave Beers. I stayed in touch with a bunch of people there. It was a great place to meet people that I still talk to today and am friends with.

Some of the contacts I met at The Tyee helped me when I freelancing — especially for the first two years after I graduated. A lot of people I interviewed through stories I did at The Tyee became people I would go to for story ideas or for interviews. It really helped put me in contact with the local journalism community and sources.

And then through The Tyee, I met someone who was involved with Megaphone [magazine] and I started volunteering and writing for them, and eventually ended up working for them also doing comms. And then, two years this summer, I’ve been at the Peter Wall Institute.

The Peter Wall Institute is an interesting place. It’s an interdisciplinary research institute. We have a bunch of programs. We have scholars-in-residence. We have international visiting scholars. A lot of it is communicating within the UBC community about programs and upcoming events. Half of my job is knowledge mobilization: reporting on the research and work that people associated with our programs are doing. And the other half is promoting free lectures and writing media advisories. It’s nice in that it’s so varied, which you don’t always find in a comms job.

We have an online magazine, so I still do some editing, writing, and interviewing.  At least 50 per cent of my job requires skills I learned in journalism school — if not more.