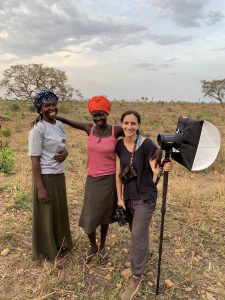 Award-winning photographer Farah Nosh is joining the School of Journalism as its Asper Visiting Professor for the 2019-2020 academic year. She will be co-leading the School’s Global Reporting Program, as well as the Visual Journalism course.

Nosh was drawn to the position because she is committed to providing mentorship to young journalists, particularly in the field, in order enhance their reporting and support their growth.

“I feel like with two decades of experience, it’s just a natural role for me to fall into right now. The focus for me is being able to share with students,” she said.

“I’m delighted to welcome a visual journalist of the calibre of Farah Nosh to the School as our Asper Visiting Professor,” said School director and associate professor Alfred Hermida. “She is a tremendous addition to the faculty.”

Nosh’s work has appeared in leading international publications including The New York Times, TIME, and Newsweek. She has worked in Iraq, Afghanistan, Lebanon, Pakistan, Syria, the West Bank, Gaza, and Egypt.

She has also documented the last fluent speakers of the Haida language in British Columbia and collaborated with renowned Haida artist Robert Davidson.

“Deep, intimate narrative is what I’m usually after. And so, how do you do that?” asked Nosh. “There are so many factors that go in to creating a compelling, visual narrative.”

“Coming in and really knowing how to use your camera is one aspect, but what’s your relationship with your subject? How do you maintain responsibility and integrity within your narrative as story is unfolding. That commitment for me is one of the most exciting things too, to share, to talk about and to watch unfold as students are experiencing it,” she said.

Reporting from the field

At the School of Journalism, Nosh is co-leading the School’s award-winning global reporting course alongside Professor Peter Klein. The course brings graduate students around the world together to collaborate on a long-term research and journalism project with emphasis on under-reported issues.

Nosh brings decades of experience working in the field internationally and hopes to mentor students in return.

“Coming in as a guest once or twice and then going on the international reporting project trip last year to Senegal made me realize there was a desire from students to integrate photography, to integrate the visual side of journalism into their reporting practice,” she said.

“It was such a satisfying experience for me because I feel like mentorship in the city is either in the classroom or a day here and there. But to actually spend morning to night, day after day together — that’s how you get to dive into the challenges of global reporting.”

From Iraq to Haida Gwaii

In September 2002, Nosh was based in Iraq, where she was one of the few freelance photographers working in Baghdad under the Hussein regime. She returned to Iraq repeatedly, covering the war’s civilian impact as well as being embedded with the American military forces.

Her work on Iraqi daily life was published in TIME and garnered her the Overseas Press Club Award for Feature Photography. Her wounded Iraq work was published as a full page in The New York Times. In the summer of 2006 Nosh covered the war in Lebanon.

In 2016, Nosh began a collaboration with renowned Haida artist Robert Davidson. He granted her permission and studio space at his Potlatch in Masset on Haida Gwaii to capture the spirit of the potlatch through portraiture of Haida clanswomen, clansmen and honoured guests.

The work continued in April 2018, with support of the Museum of Vancouver and their Haida Now exhibition. Nosh set up the studio at Davidson’s October 2018 Potlatch in Hydaburg, Alaska as part of honouring the Q’iganii; Haidas of Alaska.

Nosh holds a degree in geography from UBC and graduated from the Western Academy of Photography in Victoria in 2002. She has also been a sessional instructor in photography at Emily Carr University of Art & Design in Vancouver.