Cherise Seucharan graduated from UBC Journalism in 2017 and currently works as a reporter at The Star Vancouver. Here’s what she had to say about her time at the school and beyond:

What lead you to study at UBC Journalism? 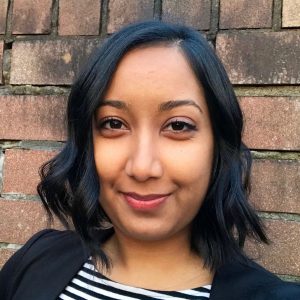 I did my undergrad at the University of Toronto and I’ve always been interested in journalism. I think I was hesitant to commit fully to the idea of being a journalist as a career, especially because I’d always heard there weren’t a lot of job prospects in journalism and that it was super unstable. But eventually I’d freelanced for a bit and I’d done student journalism and I was still really passionate about the idea of journalism and the way it could make an impact and advance social change. I started looking for schools and I found that UBC looked like a place where I could not just build skills, but also a place where people were thinking about journalism and how to improve it where you can explore those ideas.

What was a highlight of your time at the school? What about challenges?

Immediately when I think of highlights I think of Reporting in Indigenous Communities (RIIC). When I do journalism now, the lessons I learned in RIIC and things that Duncan McCue explained to us always come up. It was super valuable, not just in terms of engaging with Indigenous communities, but also figuring out how journalists can ethically engage with all kinds of marginalized communities.

I also did the International Reporting Program, and we had our piece published in The Guardian. I would always read The Guardian, and it was awesome to be able to do that as a journalist. I would say my final research project was really valuable in terms of figuring out how to manage things like a very long term project on my own, which was also probably one of the biggest challenges.

IRP was also a really big challenge, mostly because the idea of IRP is that we’re not doing parachute journalism. So with the nature of going into this community in a foreign country and then really quickly trying to form connections, we had to be extra careful in our approach … Ours was aided by the student partners we had there and developing relationships before going down. We went to Columbia. This was for the resilient cities project.

I think a lot of the lessons we learn at j-school is how to be accountable to communities, and something that was underscored by RIIC is that journalism is really a negotiation between the demands of the news cycle and maintaining accountability to sources and communities. Similarly, with IRP, the challenge was to maintain accountability and fairness, especially because we were talking to potentially vulnerable people who maybe had never spoken to media before and all of a sudden they were about to be in an international news space, which is really scary. Also they were operating mostly in Spanish, and then being published in English, so that’s another barrier to accountability and accuracy.

Can you share more about your final research project?

What did you do after graduating?

Right after graduating I got the CBC News Scholarship, where you have a summer at the Vancouver office and get cycled through web, T.V., and radio. I was a casual [associate producer] at CBC for four or five months and I was also doing some freelance social media work on the side as well as freelance journalism. Then I landed this gig at The Star [in Vancouver] so that’s what I’m doing right now.

Technically my beat is looking at health care. But I’ve also focused on a few more topics such as civil liberties and immigration. In our newsroom we have our beats, but most of us do general assignment as well.

What are some of the skills you picked up at UBC that you still use today?

I did do some journalism beforehand, but I think what j-school really helps you do is forces you to take on these large projects that you might not have previously taken on. I’d also say one of the major things would be figuring out how to ask questions in a way that gets you good answers and also gives people space to elaborate. I feel like as a journalist, you’re kind of always rushing to meet your deadlines, but you also want to develop relationships with sources and make sure you get some really meaningful quotes from them. Something I learned with j-school is asking good questions, and that’s something I use every single day. As well as being able to look for a story in different ways and finding different ways to dig deeper into finding something maybe not everyone else has.

What’s your advice for students thinking about studying journalism at UBC?

Go in with a reason for being there and an idea of what you want to learn. For some students who go in never having done journalism before, that’s super great, but I think it’s also more helpful to approach it from a standpoint of knowing exactly what you want to get out of it and learning not just skills but some of the broader approaches and thinking around journalism that’s covered at UBC. Be really clear on the type of skills and journalism you want and then you won’t get caught up in a lot of choices. There are so many different directions you can take journalism in and instead of getting bogged down by that pressure, just knowing what you want is key. As a caveat, I went in wanting to write, and I’ve always thought of myself as a writer. But with IRP I did a lot of video, and that’s super valuable. Even though I don’t use it every day, I’m glad I learned.