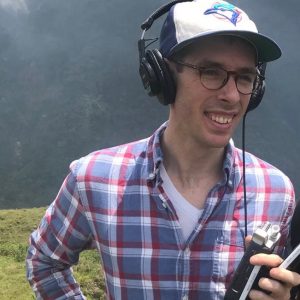 Daniel Guillemette graduated from UBC Journalism in 2012 and currently works as an audio producer with the New York Times’ daily podcast, The Daily. He previously worked as a producer for WNYC Studios in New York. Prior to joining WNYC in January 2017, he was an associate producer for CBC Radio in Toronto, working on shows including Out in the Open, q, Day 6, As it Happens, and Metro Morning.

Here’s what Daniel had to share about his time at UBC Journalism and beyond.

Prof. Kathryn Gretsinger is the reason I fell in love with radio. She had such a passion for what radio and audio storytelling could do, and she proved it with what she exposed us to and taught us — story arcs, deceptively smart writing, immersive reporting to capture the special moments that every great story needs. I converted to radio pretty quick after coming to UBC, and I am forever grateful for that.

I gained so much at UBC just by trying and failing. I had no idea where stories would come from. I remember being told, ‘Just walk around and talk to people.’ My beat was in the Downtown Eastside, and so many of my memories from school were just hanging around there, meeting people, bugging people, and just learning the beat.

The professors also really supported me. One of the most important things that happened was getting an internship with CBC Radio in Toronto. I started interning at As it Happens and then I started bouncing all over the building at the CBC.

That was during the first summer of my degree and then I started getting work at CBC in Toronto. The school supported me in being able to finish my degree from Toronto. I could continue to work and I think they saw the benefit of that, of me having a good job. That led to a career and now I’m in the States at WNYC. I was always very grateful to Peter Klein, who supported me finishing my degree from afar.

I was always fascinated with WNYC and there’s so many great programs here. It was a big jump to move here, but the CBC taught me so much over the course of my time there, that the transition was smooth. New York is a key hub for podcasting and so I wanted to see how I would do in the centre of it. I’m working with really great editors here at the station, and have been very fortunate to be given exciting, interesting assignments. The other thing about being here in New York is just meeting so many interesting producers. There’s so much variety in terms of what people are trying and doing here. I feel very lucky.