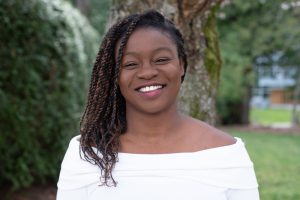 Dannielle Piper graduated from UBC Journalism in 2019 and now works as the communications coordinator for Kids Brain Health, a national research network focussed on brain development and neurodevelopmental disabilities in youth. She also works as a freelance journalist in Vancouver.

During her time at the School, Piper produced several long-form works, including a feature on a family-owned store that aims to fit its transgender customers, and a three-part audio documentary on the n-word’s usage in hip hop, exploring how language and music intersect with identity in Canada’s Black diaspora.

Why did you decide to pursue journalism?

I wrote for the Ubyssey and CITR arts report during my undergrad [at UBC]. One reason why I picked UBC Journalism was because no university in B.C. had a master’s and most of them almost made you choose straight off the bat what you wanted to do as opposed to providing a foundation and then letting you choose your focus afterwards. And I felt like that was really important for me to make any important decisions about my career — to not just jump into whatever I think looks good, but to understand each and every single one of the mediums that I would be working with and then make a decision.

You wrote a few pieces on the trans community. Tell us what spurred those stories.

I was walking down Commercial Drive and there’s this little store called JQ clothing, and I kept seeing this mannequin in this red dress and I thought, “Oh my God, I really want that red dress. It’s really beautiful.” And then I looked at the mannequin and thought, when they put these things on mannequins, they never fit my body type because mannequins are always so very thin. But then I looked at the mannequin more closely and thought maybe that could actually fit me. It had broader shoulders. It had bigger thighs. I was a competitive swimmer, so I have pretty broad shoulders and a very curvy-athletic body type. And then that’s when I realized, “Oh my God, that mannequin’s male.” I realized that the male and female mannequins were all dressed in a variety of clothing that weren’t traditionally feminine or masculine respectively or even gender specific. This was new for me as I grew up in a very homophobic country and I wanted to explore how stores, either directly or indirectly, communicated safe spaces for LGBTQ folk. And so I pitched it for my last Thunderbird story.

Kathryn [Gretsinger] loved it and introduced me to the owner of the Breast Form Store. They sell breast forms to trans women and drag queens — anyone who really wants to try them out and feel like themselves. And I thought that was just so interesting. And so when it came to my second year and I was thinking of feature stories, I really want to know the original story of that store. So I did my piece on that.

How did you navigate reporting on a community that’s so stigmatized in mainstream coverage?

It was really difficult. I was terrified. I’m a Black woman and I know how important it is to report well on a minority community. I felt a huge weight to make sure that I didn’t do damage to the story. I was definitely more scared of publishing this than I was any other story on racial issues that I’ve done before. I remember actually having a conversation with Kathryn when I was actually doing my Thunderbird and saying I’m actually really worried about doing this story. I’m frightened that I will offend somebody. I am frightened that I will do it wrong. And she said we’re not going to rush this. You’re going to take your time. And it’s going to go through several eyes before it’s published. Even if you screw up, at least you’ll learn.

I asked the store manager to introduce me to some of their clients that might be open to being interviewed. And luckily some said yes, and I had some really beautiful, funny conversations with many of them. It was really important that I was patient and didn’t push and that I was open to just listening. I didn’t want to overload them with questions, so I often just asked one or two questions and let their stories take it from there.

Describe what you pursued for your final research project.

I’ve always been super, super interested in how race, gender, and sexuality influenced pop culture. Saranaz [Barforoush] and I began discussing how language and music intersect — especially around where the n-word is used in hip-hop. I grew up in the Caribbean and that’s not a word I hear very often, but it’s a word that I’ve heard very often amongst my Black friends in Canada or the States or even my cousins. So I did some research on language and identity with regards to music and the n-word and hip hop was possibly the most controversial.

I asked, what is this word to some Black people? I don’t believe in policing language of Black people because we already get that so often from other people. But I was really interested in figuring out why some people were perfectly fine using it and why some had a very visceral reaction to it. So I started doing research and learned things I never knew before.

What were some of the most striking things you found?

I’m going to quote part of my literature review: “Upon the arrival in the Americas, the slaves learned the n-word and used it as a means of self-reference. However, the slaves pronunciation of the n-word differed significantly from that of their masters, many slaves were unfamiliar with pronouncing words with an -er ending. And by the 19th century, the n-word’s meaning amongst the slaves started to transform. It meant a survivor. It was during this time that the n-word served as an example of counter language, a system of conveying information, whereby words have multiple meanings by using the n-word, a slave was able to identify oneself as someone participating in the culture of survival and therefore resisting subjugation.”

Another interesting thing I found out with regards to language and identity was that the n-word was very masculine. It’s very hetero. And so by its very nature, it wasn’t really referring to women or anyone in LGBTQ space.

How did you organize the audio documentary for this project?

It was split into three parts. Origins, where it talks about the origins of the n-word. Language and identity, and politics of usage. I split them into three 10-minute segments. I was the one narrating it and I spoke to several people in the Black diaspora about why some people use it and why some don’t and then what does it mean in terms of their identity.

Any plans on publishing it?

I’ve been thinking about pitching it to a few places, but it’s one of those things that I’m afraid to unleash. The conservation clearly needs to be had, but it’s a conversation that is mainly Black. I want it to educate and provide further awareness of this issue, but also don’t want people to feel entitled or like they have an equal stake in this conversation. But I’m still looking, especially with all the events going on right now.