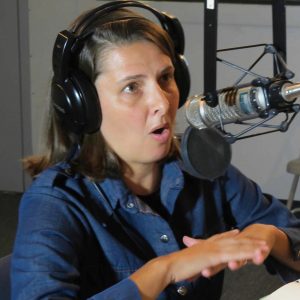 Dawn Marie Paley graduated from UBC Journalism in 2010 and immediately started working on her first book, Drug War Capitalism, which came out in fall 2014. She is based in Puebla, Mexico, where she recently completed her PhD in Sociology at the Autonomous University of Puebla. She is currently working on another book about social issues and human rights in Mexico during President Andrés Manuel López Obrador’s tenure.

Paley’s freelance journalism from Central and South America, South Africa, Europe and elsewhere has appeared in many publications, including The Vancouver Sun, BC Business Magazine, The Nation, and she has also reported for Democracy Now!

Paley is the 2019 recipient of the Portenier Human Rights Bursary from the Canadian Journalism Forum on Violence and Trauma. The award allows journalists to receive hostile environment safety training designed for reporters who cover armed conflict and other crisis situations. She will attend a course at the Dart Centre for Journalism and Trauma and based at Columbia University’s journalism school.

Here’s what Paley had to share about her time at UBC Journalism and beyond:

Tell us about the course you’re taking about journalism and trauma.

I’ve been reporting from some complicated places, from Central America, México and Colombia  — places that there’s been a lot of different kinds of violence, including state and paramilitary violence. It’s been about 15 years now and I’ve never done more specialized training to get tips and techniques for making sure everyone stays safe. It’s been through a self-taught, mostly instinctual process so far — and I think it’s been successful — that I’ve protected myself and my sources. The course at Columbia at the Dart Center looks quite interesting because it’s focused on how to report in a safer way, starting from the planning process — how to plan to report safely, not just how to respond when you’re in the field and something goes sideways.

What was your path after graduating from UBC Journalism?

My book Drug War Capitalism came out in 2014 and that same fall I started a PhD program in Puebla. I defended my PhD a year ago this fall. It was basically a four-year writing project that I did with family members of people who have been disappeared in the north of Mexico. Earlier this year I signed a contract for a new book looking at Mexico under the new president. I’ve been slowly getting back to freelancing since I finished my PhD, sliding back into the world of journalism after putting in some time in academia.

What were some of the highlights and challenges of your time at UBC Journalism?

I started the MJ in 2008, at the same time we were starting to organize with the Vancouver Media Co-op around resistance to the 2010 Olympics in Vancouver. It was an anti-capitalist, anti-colonial convergence, the callout was “No Olympics on Stolen Native Land.” I was active with organizing media and really connected to these movements and that was almost a full-time job. I was doing a lot of community, independent and alternative media during that period, which I think shaped my experience a lot. I was able to, for example, take a lot of the stuff I was learning in j-school and roll it over into community journalism workshops and fact sheets and tips for other journalists I was working with. We were giving legal workshops, for example, through the Media Co-op. That’s part of my experience that made it really great — being able to translate some of the most useful material from the classroom and share that with folks in the community.

What skills did you develop at UBC Journalism that still serve you today?

I went to journalism school because I had already been working as a freelancer for probably five years or so. My idea of going to j-school was that I would be taken seriously after I went to journalism school because I had been working sort of independently and mostly in the left media. J-school helped me understand the mainstream media landscape better and it also helped me understand some writing and researching techniques, especially in terms of how to reach out to different sources, and how to ensure your writing is balanced. Some of that more classical journalistic training remains useful in my practice, as does the legal training.

Tell us about your thesis.

I wrote my Master’s thesis on the coup d’etat in Honduras. What happened in Honduras after the coup was that the left blamed President Obama and the US government and the right wing media blamed Venezuelan President Hugo Chavez. But the actual on-the-ground situation wasn’t reflective of either of those realities. Those were parts of what was going on, but what was actually going on was local elites were protecting themselves and their fortunes. So in the thesis, I looked at how journalists can come to an understanding of how transnational capitalism works, in order to determine who they should interview when arriving to report in foreign countries.

In the thesis, I asked: who are the elites in Honduras, what’s their role, what’s their background, and how do their activities impact what’s going on in the country politically. I think there’s a problem with foreign correspondence, whereby US or Canadian journalists (or their editors) constantly want to make the story about Canada or the US when a lot of times it’s not. Canada or the US are often a factor because of foreign direct investment or because of diplomatic or civil society activity or whatever. But there’s also a lot of crucial local factors that often get missed. I went down to Honduras and reported four stories, which were published in different magazines, and a piece of the thesis went into Drug War Capitalism as well. Prof. David Beers was my thesis supervisor, and I briefly worked at The Tyee, which was also a great experience.

What advice do you have for students interested in reporting abroad?

It’s a hard context, but if you want to do it, it’s possible. Just keep writing. My motto is written on a little post-it note, it says, ‘Keep Writing.’ Wherever you’re working, try to always be working on something you care about and your own stories as well, on the side if need be. There are different theories of how you can get into this work of writing and filing abroad or being a freelancer. One of them is you go and do a bunch of unpaid internships in New York or Toronto and you work your way up and get the connections. Another, which is the path I followed, is to go out and do it, writing mostly for small publications and often seeking other work on the side. For quite a few years before j-school, I was doing temp secretarial work to fund my reporting. So yeah, just keep writing. The other thing is to try and diversify to who you’re selling your work. What I would often do would be to go out and report a story and then sell a newspaper story, a magazine story, and a radio story — a suite of different products around a single reporting trip. Being a journalist covering state violence, capitalism and social struggles is definitely not something I do because it is a stable job or because of the money. I guess I think of it as my small contribution to movements towards change and a more just society.