Award-winning digital media pioneer Alfred Hermida has been appointed as the next director of the Graduate School of Journalism at the University of British Columbia. 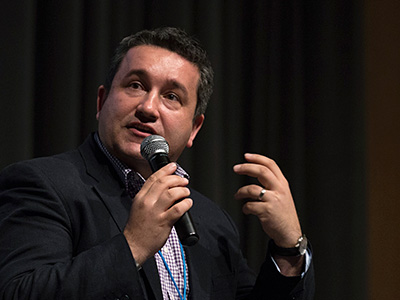 An associate professor recognised internationally for his research into social media and new media storytelling, Hermida brings almost 20 years of experience in digital.

“The school has been leading the way in Canada in preparing students for an evolving media industry,” said Hermida.

“With a world-class faculty, we are well placed to equip students with the mindset and competences they need to prosper in a digital knowledge economy.”

Hermida takes over from outgoing director Peter Klein on June 1.

“I am happy to hand the directorship over to Dr. Hermida,” said Prof Klein, “and am confident he will take the school in a new direction of scholarship.”

Hermida brings a record of curriculum innovation to the directorship. Since joining UBC in 2006, he co-led the development of a multiplatform approach to journalism that prepares students to work in a variety of media. He also developed an undergraduate course in new media and an award-winning social media course, offered in partnership with the Sauder School of Business.

His new book, Tell Everyone: Why We Share and Why It Matters (DoubleDay Canada, 2014) received the 2015 National Business Book Award, which recognises the most outstanding Canadian business-related book. Tell Everyone examines how social media is reshaping the worlds of media, business and activism.

He is co-author of Participatory Journalism: Guarding Open Gates at Online Newspapers, (Wiley-Blackwell, 2011), an international comparative study of audience participation in mainstream media. He is now working with three international scholars on the Sage Handbook of Digital Journalism, due out in 2016.

Since 2006, he has published 16 papers in leading peer-reviewed journals such as Journalism Studies, the Journal of Computer-Mediated Communication and the Journal of Broadcasting and Electronic Media, as well as 13 books chapters.

Hermida has a distinguished journalistic pedigree, having honed his craft in telling stories with impact through 16 years at BBC News. He spent four years as a correspondent for the BBC in the Middle East and was one of the founding members of the award-winning BBC News website in 1997. During his four years as daily news editor, the site won the BAFTA for best news website four years in a row.

He holds a Ph.D. in journalism from City University, London, and a Master of Arts in Latin American history from University College, London.