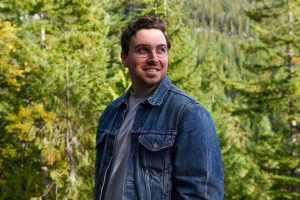 Dustin Patar graduated from UBC Journalism in 2019 and, before COVID-19, was based out of Iqaluit, Nunavut as a reporter for Nunatsiaq News. He’s currently reporting remotely from Vancouver, with plans to return to the territory in July.

Patar’s work also follows his interest in natural disasters and how they intersect with environmental issues. He’s produced several long-form pieces on topics from the global fishmeal industry, student wildfire firefighters in B.C., and communities in California searching for ways to live in a region increasingly threatened by wildfires in the U.S. for News21.

Here’s what he had to say.

Why did you apply for journalism school?

I was living in Vancouver and thought I’d stay local so I applied to UBC. I had finished a degree in communications with a minor in publishing and I knew that I didn’t want to go into something like advertising; I knew I wanted to do something I felt good about that could help people. I had done work on some documentaries and went to film school for two years. So non-fiction storytelling was in my purview but not specifically journalism. And between experiences I had doing my own projects and the 2016 election — I remember watching that and almost hearing this call to journalism.

What are some projects you did as a student that stick out?

I did RIIC [Reporting in Indigenous Communities course] my first year. We covered Squamish Nation. We focussed on the Squamish language outside of the classroom and how, while the classwork is great, there were real struggles in implementing it in the home and in the community, making sure it’s always being used.

Then GRP [Global Reporting Program] was a great building block on top of RIIC because you have to build relationships with communities and sources. Although we only spent two weeks reporting at our location [in West Africa], I developed relationships long before we went there and I still talk to people in The Gambia. I wanted to do more foreign reporting and that was kind of the first taste of it. It’s extremely difficult and there are funny stories of us getting locked in a hotel, about to miss our ferry, and having to scale a wall to escape.

What drew you to the News21 fellowship in Phoenix, Arizona after you graduated?

I saw News21 as, to an extent, GRP round two. After the 2016 election, as an American, I wanted to do reporting in the States. I’ve had a fascination with natural disasters for a long time. One of my first Thunderbird pieces was about how 40 per cent of the B.C. Wildfire Service was staffed by summer students, and I talked to a few of them. And then when News21 turned about to be about natural disaster recovery, it was perfect.

I got to work with other journalists at my level, see what they brought and learn from them. I had lived in Arizona before and I got to go back at a very different time in my life. I also knew they [News21] did some really great work with video, and that was another chance to take all the lessons from GRP and immediately apply them.

I drove down [to Phoenix] early May and on June 3rd, we were one of the first teams out in the field. We connected with a wide range of people, sat down with them and had good chats. I think things like natural disasters are pretty unifying. Everyone understands they face the same kind of threats.

[In the newsroom] sometimes I would just keep my head down, but other times, I ended up being called into all these different meetings: a design meeting, a video meeting, a story meeting… And then people would start coming to me with various related questions.

And now you’re a daily news reporter. That’s quite a shift from a lot of your prior work. Tell us a bit about your current job at Nunatsiaq News.

Back in July [2019] in Arizona, I knew News21 was ending in a month, and I basically started applying for jobs — at one point, I was doing one a day. And not all of them were in journalism. When I applied for Nunatsiaq News, I got an interview and they offered it to me. I was a bit worried about moving to the Arctic for it, doing daily news — especially since I did very little writing in J-school. And this was primarily a writing job. I’ve always been one to challenge myself, but that was definitely intimidating. Plus we have about four to five hours of daylight in the winter, and then the cold—it was a pretty big change from what I was used to.

Within my first month in Iqaluit, there were municipal elections and federal elections, Trudeau came up, [Jagmeet] Singh came up after the election…and in November I had to cover some of the territorial legislature. It was a lot in a short time, I definitely dove into the deep end and I’m grateful for it.