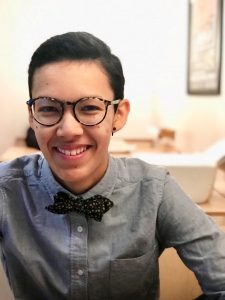 Emi Sasagawa graduated in 2015 and currently works as the Communications Manager for the UBC Faculty of Graduate and Postdoctoral Studies. Prior to coming to the School of Journalism, she spent a decade living in Latin America, Europe and Asia.

While at UBC Journalism, Sasagawa was a student in the International Reporting Program and contributed to the award-winning project Out of the Shadows. She was also the recipient of the Rafe Mair Award for Excellence in Journalism. Upon graduation she was awarded the News21 fellowship, investigating marijuana legalization in America. Her work has been published in the Washington Post, The Tyee, Megaphone Magazine, HuffPost Canada and AlterNet.

How did your j-school experience help you transition into your career?

I got to do a lot of amazing things while I was at the School of Journalism and, in my head, I definitely thought that I was going to go down the path of being a reporter, hopefully a feature writer. When I finally wrapped up News21, I wanted to stay in the U.S. but with immigration issues it wasn’t an option for me. So I came back to Canada and started looking for job opportunities. But everything that I could find was either contract work or freelance. I felt the jobs that were available to me as a young reporter didn’t provide the financial stability I needed after two years paying for graduate school. I really needed a full-time job and so it became clear that I was going to have do a combination of journalism and something else or that I was going to have to go into a different field.

Still, my experience at j-school shaped my experience in the job market. I soon learned how valuable and desirable the skills I learned while in the program were to people recruiting young professionals — skills that included proficiency in social media analysis and production of digital content as well as ability to work under tight deadlines and under a lot of pressure.

Within a couple of weeks of applying to a range of jobs, I had three offers for full-time positions at three very different companies. UBC is a great employer. I got a job at the Centre for Teaching, Learning and Technology. I was only supposed to be there for a year. In my head I rationalized that decision, you know, I’ll set some money aside and then I’ll go back into journalism. Into my first year they basically made a position for me, so I was initially hired as a marketing and communications coordinator and then I became a video and digital specialist.

I was lucky to be given a lot of freedom to try new things. I pushed for the production of multimedia content and character-driven storytelling — and we’ve seen great improvement in how our audience interacts with our content. After two years of being in the position I had to sit and really think about what it was that I wanted, and what it came down to for me was that I wanted to be a storyteller, in whatever capacity that may be.

What are some of the hard skills you learned at UBC that you carry with you today?

The first job I had, I worked as a video producer for a unit on campus. So, on a basic level, it was knowing what a story is and coming up with a project brief, being very clear about what your goals for the shoot are, shooting the interview, shooting b-roll, putting everything together, editing and coming up with a final product. Those are all things that I learned and perfected while at UBC Journalism. Those are transferable skills that I took into a job that didn’t have journalist in the title, but used the same skills. And then just in general with content production. A lot of the content we produce across UBC units is digital. I worked at the School of Journalism’s SMARTTLab for three years, so having an understanding of social media analytics tools has always been super useful.

Do you think it’s difficult to go back into journalism having worked outside it?

I work full-time for Grad Studies. I write almost monthly for Megaphone Magazine, so that’s a way for me to feel a little better about not having full-time job in journalism — the idea being that if eventually I wanted, I could go back. Then I do contract work for video production. Honestly, it’s definitely a fear of mine that I’ve written out journalism because I haven’t been in it. At the same time, though, in the last three years since graduating I’ve worked for Peter Klein through the Global Reporting Centre a number of times, and I did a story for CBC last year. I think what that proves is that if you have the skills and if you consider yourself to be a storyteller, I think there’s always opportunity to go back. As it stands, I’m really happy in the job that I have and I don’t see myself quitting to become a reporter. That doesn’t mean I don’t consider myself a storyteller. At the end of the day, coming to UBC wasn’t so much about being a journalist, but honing in my skills of telling stories and I’m still doing that. It might not be the way that I initially envisioned, but I’m happy about it.

Of the lessons you learned at UBC Journalism, which one has proven to be the most valuable?

I think the most important thing I’ve learned while in the program is the role of a storyteller in the act of telling a story. Sometimes journalists try to hold on to the illusion that we can maintain a distance and remain strictly observers. Unfortunately, the truth is that storytellers are never just observers. As reporters we are, at the very least, observing participants. What we do and don’t do, it matters. Unasked questions, unphotographed stills and unrecorded shots — these are choices we make in every moment that determine the final story. To understand that is to recognize our responsibility as reporters with the weight and humility necessary to continue to explore new avenues for telling old and new stories.

Is there anything else you would like our prospective students to know? Any word of advice?

Do your research before you come to UBC. It’s easy to assume that when you get here you will have plenty of time to figure things out — and you will have some room to shape your experience as you progress in the program — but time flies. It really helps to know which classes you are interested in taking and how you plan to use your experience in j-school to further your career.