Freelance journalist Ethan Lou is coming to the UBC School of Journalism to share his experiences covering forest fires in B.C. and Alberta in recent years.

The School is hosting Lou from March 4 to March 15th, 2019 as its 2019 Visiting Journalist in Forestry Issues. 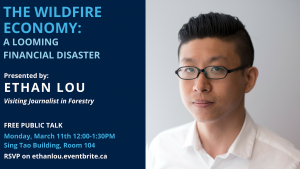 During his time at UBC, Lou will focus on the growing economic impacts of forest fires and what can be done about them.

“Business and the environment do not always mix well,” said Lou. “Journalists often cover just one and not the other. The economic impact of our changing environment is a vital story, yet often undertold.”

The 2016 Fort McMurray, Alberta forest fires shut down oil production worth $1.4 billion and became the most expensive disaster in Canadian history for insurance providers.

In B.C., as 2018 surpassed 2017 as the worst fire season on record, the provincial government surpassed its firefighting budget by more than $200 million.

As forest fires intensify with climate change, Lou is concerned that more money is being spent on fighting the fires, rather than preventing them.

“We are spiralling toward greater and greater wildfire-caused economic losses,” he said.

During his time at UBC, Lou will be a guest lecturer in journalism classes, as well as classes in the faculties of forestry and land and food systems. The School of Journalism will also be hosting a public talk on Monday, March 11, 2019, from 12:00 to 1:30 p.m. in Room 104. Please RSVP.

Lou’s work appears in the Toronto Star, the Guardian, the Washington Post, the South China Morning Post, and magazines including The Walrus, Maclean’s, and Maisonneuve. Previously he reported for Reuters in Calgary. In addition to forestry, Lou covers cryptocurrency extensively; he’s a senior partner at Ocuis Corp., a cryptocurrency mining firm and consultancy.