Haley Lewis graduated from UBC Journalism in 2018 and currently works as the Indigenous hub staff writer at TVO in Ottawa. She is Mohawk from the Bay of Quinte on her father’s side, and said her cultural upbringing and ethical compass continue to drive her in making decisions both in and outside the newsroom. 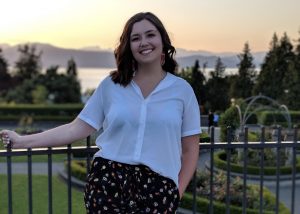 In 2017, Lewis was the recipient of Journalists for Human Rights Emerging Indigenous Reporter’s Scholarship. She was also awarded UBC’s Aboriginal Graduate Fellowship.

Right after graduating from UBC, Lewis worked as a CBC News Joan Donaldson scholar. She then worked as an Indigenous reporter at HuffPost Canada in Toronto prior to joining TVO.

Here’s what Haley had to say about her time at UBC and beyond:

I’m the Indigenous hub staff writer, which basically means I cover Indigenous affairs for all of Ontario … and then there’s other local hub writers across the province. We kind of work in conjunction with one another. If I need them to go to a community to take photos, I can pull those resources and vice versa. But basically what I do is very self-driven. It kind of feels like freelancing in a work environment. The TVO offices are in Toronto, so I’m here in Ottawa alone. It’s like a normal work day, but it’s a lot of Google Hangouts and phone interviews.

We have one pitch meeting every week, but we’re constantly working on stories. The kind of stories we do are current affairs stories. So stories that tie into the news, but aren’t exactly breaking news. I spend most of my time either researching, interviewing people, or going to conferences and meeting people who can give me other connections. It’s really just been about making those connections right out the gate.

We’re expected to bring two pitches each week and then we can work on these stories more long term. I’ve got five or six stories going on at the moment. There’s a lot of freedom, which I like. I can pretty much pitch anything and if there’s something the editors don’t like we work together to make it something they do like. I get to combine cultural stuff that interests me and address important issues in communities too.

What has the transition from UBC Journalism to working as a journalist been like for you?

For me, the Donaldson was a good experience all around. I got to try out a bunch of things, locally in Vancouver and then the entertainment unit when I was in Toronto, as well as current affairs radio, which holds a soft spot in my heart. I got to work with Eli Glasner really closely on a piece about podcasts going to Hollywood … and then helping with the production for a clip on The National was really cool.

With journalism everything is so short term. I feel like when you’re young it’s contract after contract and it’s hard to kind of land on your feet anywhere. So, I was trying to figure out what I was going to do next and I was thinking that up until that point my only experience had been with CBC. I thought, ‘Okay, I should probably try something other than CBC,’ which is why HuffPost was intriguing to me. That was a short three-month contract through Journalists for Human Rights. It’s the first time that Journalists for Human Rights partnered with HuffPost.

When I went into journalism the purpose was to do Indigenous reporting. You see work of Duncan McCue and Connie Walker and think, ‘Wow, this is great, but I want more of this.’ Then going to HuffPost, it was an Indigenous-reporter-specific position. I’m pretty sure they don’t have a single Indigenous reporter, like a full-time staffer at any of their national or international locations. I know this is something so minute, but when I started there I had maybe 200 Twitter followers. When I announced my new job I got well over 2,000 and I feel like that’s an indication that people want Indigenous reporting. There’s a necessity for these kind of stories.

They really did give me free rein on the kind of stories that I was allowed to tell. One thing was they wanted me to do a series about urban Indigenous [people] in some way, shape or form. I got to commission a Cree artist from Quebec to draw the series and really make sure that everyone who was being interviewed for the series was comfortable. It was incorporating those traditional journalistic practices but also incorporating things you learn in [UBC’s] Reporting in Indigenous Communities course, where time and relationship building are important. So, HuffPost was a great experience in trying something new and I think that helped me land the job that I have now at TVO, because of the kind of longer-form, current affairs type stories I did while I was there.

What led you to UBC Journalism in particular?

There’s the personal side and the academic side. I chose it because of Duncan McCue’s Reporting in Indigenous Communities course. At the time, I think that was the only course in any journalism program across the country … Out west you’re also a lot more immersed in Indigenous culture, it’s a lot more visible. So, that was 100 per cent my driving decision in choosing UBC.

What are some of the highlights and challenges of your time at UBC Journalism?

Because of the different newsrooms I’ve worked in, I’ve had to pitch for a bunch of different people, and I feel like pitching for Frances Bula prepares you for life. The pitching process is rigorous but it’s good. Pitching to Frances is harder than pitching to some newsrooms, about on par with where I’m at right now. Without that I don’t think I would have the thick skin that you need to pitch and move on if it gets rejected.

And of course, to this day, Kathryn [Gretsinger] will shoot me a text just to check in and Andrea [Yan] was so great too. I think for me it was about the relationships we were able to build with professors and with each other and without that I don’t think I would be where I am today. It’s important to make those good impressions in j-school so people can vouch for you when it comes to the working world. As great as the academic side of things was, the people definitely trump it for me.

What’s your advice for people thinking of coming to UBC Journalism?

UBC helped shape me in terms of the kind of reporting I want to do. It let me try things in a safe environment. Also, this is a problem that I have with internships across the board — it’s hard doing unpaid internships and I think unpaid internships really do cater to an upper echelon. But if it wasn’t for my internships I would not be where I am. I would say if you’re thinking about journalism in general, just do it … It’s an amazing career that allows you to do something different every single day. At the end of the day, you never know what will happen or how you will feel. J-school advice would also be to ask questions of alumni and current students before jumping in and be grateful that people are willing to share their time with you.