Ian Holliday graduated in 2015. During his time at the UBC School of Journalism, he interned at the Angus Reid Institute, a non-partisan, not-for-profit polling organization, and CTV Vancouver. After finishing his internships, he joined CTV Vancouver as an online editor and reporter and now works at the Angus Reid Institute (ARI) as a Research Associate. 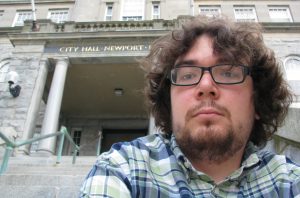 I had worked as a reporter for small newspapers before coming to UBC, and I have no doubt I could go back to doing that tomorrow if circumstances were different. I think the transition j-school helped me make was less “into a career in journalism” than it was into a more ambitious approach to journalism and storytelling. I think bigger now than I did before UBC, and the stories I try to tell through polling with ARI reflect that.

I still remember the feedback Alfred Hermida gave me after I turned in my first draft of my first Thunderbird story. He wrote that I needed to “take control of the story,” to decide what was important and then tell the readers why.

Before j-school, I think my stories were too often just collections of quotes and facts. Today, at ARI, most of my work is based on our polling data. On one level, there could not be a more straightforward method of conveying information. The numbers are what they are, and anyone can look at them in their entirety on our website. On another level, the data itself is not a story. It’s overwhelming. It’s noisy. It’s very often self-contradictory.

My job is about taking control of the story. It’s about interpreting the data and the information we learned from collecting it and presenting it to our audience in an accessible way.

What’s been the piece of journalism you’ve produced of which you’re most proud? What kind of impact do you feel it’s had?

What I do day-to-day isn’t journalism in the strictest sense, but it has a lot in common with the field. I still ask a lot of questions, but instead of asking them to a handful of well-positioned key sources, I’m asking them of a demographically representative, randomized sample of Canadians.

The stories I’m most proud of are the ones that I had a hand in developing from start to finish – ones on which I led the design of the questionnaire and then led the interpretation of the data. Our 2016 reports on marijuana legalization and political correctness/self-censorship are prime examples.

At its best, our work challenges conventional wisdom about what the Canadian public thinks. I think our recent partnership with the CBC on Canadian values is a prime example of the impact our work can have.

Has the j-school alumni network been helpful for you in terms of finding stories, sources, support or jobs?

On a personal level, yes. Most of the people I know in Vancouver are UBC j-school grads, and we’re all having varying degrees of success navigating the city’s media scene. It’s lovely to be able to spend time with so many talented people and get emotional support and encouragement from them.

I have less experience looking to alumni for more tangible career assistance – finding stories, sources, or jobs – but I’m optimistic that those things will come when I need them.

Would you recommend the j-school to aspiring journalists? If so, why?

Before UBC, I firmly believed that you don’t have to go to grad school to be a journalist. I still believe that.

I think the value of j-school, in general – and the value of UBC, specifically – is in the experiences it facilitates. Attending UBC helped me think more deeply about what kind of journalist I want to be, and gave me opportunities to try that journalistic identity out, both through coursework and through internships. I recommend it to anyone who’s still trying to figure that stuff out.