Second-year Master of Journalism student Braela Kwan has been named a 2020 Carnegie-Knight News21 fellow, working with an international team of student journalists reporting on youth violence in the U.S. 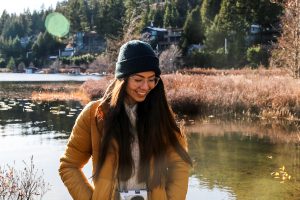 News21 is an in-depth multimedia student reporting project based at the Walter Cronkite School of Journalism and Mass Communication at Arizona State University.

Students are conducting research, interviewing experts and making plans for their investigations come spring. They will work out of the Cronkite School’s newsroom from May to August.

Last summer, she completed a practicum at the online, B.C.-based publication The Tyee where she covered the province’s cannabis industry through an agricultural lens.

This year, Kwan is part of the Global Reporting Program — for which she traveled to Nepal to report on education — and the investigative Tainted Water series, which looks into domestic drinking water issues.

This year’s project will examine youth violence and the juvenile justice system in the U.S., diving into issues like disparity between sentencing and jail time, conditions of juvenile detention centres, and the impact on victims and their families and communities. The students will travel across the country and report from several different states.

“Incarceration is the reality for tens of thousands of minors in America,” said Kwan. “I hope to do the type of storytelling that serves the people living these experiences.”

Kwan is the seventh student from UBC Journalism selected for this fellowship. Last year, Dustin Patar contributed to State of Emergency, a five-part series investigating U.S. response and recovery to natural disasters.

In 2018, Anya Zoledziowski was part of Hate in America, where she examined the cases of missing and murdered Native American women.

Past projects have been published in major outlets such as The Washington Post and USA Today. They have garnered numerous awards, including five EPPY Awards from Editor & Publisher magazine and the Student Edward R. Murrow Award for video excellence.