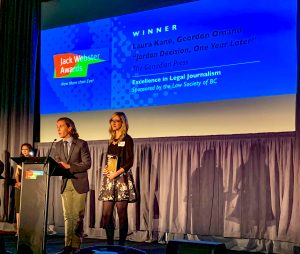 Alumni and students at the UBC School of Journalism took home three journalism awards and four awards for student journalism at the 2018 Jack Webster Awards.

The School’s founding director, Donna Logan, was recognised with the Bill Good Award.

Established in 1986 in honour of B.C. reporter Jack Webster, the awards recognize excellence in reporting by British Columbia-based journalists. The winners of the 32nd annual awards were announced at a dinner on October 29, 2018 at the Hyatt Regency Vancouver.

UBC alumni Matthew Parsons was a member of the CBC Radio One team who won the Webster award for excellence in feature and enterprise reporting for the CBC podcast series SOLD! Current UBC Journalism student Monique Rodrigues also worked on the series during her internship at CBC last spring.

Alumni Catherine Rolfsen and Jodie Martinson were nominated in the same category for their work on the CBC Radio One series “Wasted Lives: BC’s Biggest Addiction Crisis.”

Alumni Claudia Goodine was part of the CBC Radio One team that won in the Best Breaking News Reporting – Radio for their coverage of the government’s purchase of the Kinder Morgan Trans-Mountain pipeline.

Alumna Laura Kane received the Webster Award for excellence in legal journalism for her coverage of the Jordan decision, one year later, alongside co-winner Geordon Omand. 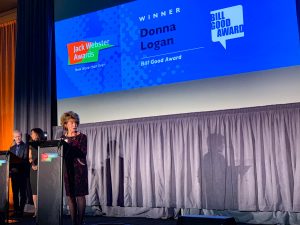 The founding director of UBC’s Graduate School of Journalism, Donna Logan, was honoured with the Bill Good Award, which recognises an organisation or individual from B.C. who has made significant contributions to journalism in the province.

“We owe a tremendous debt to Donna Logan for her vision of the School of Journalism, setting the foundation for the success of graduates in years to come,” said current director Alfred Hermida.

UBC faculty and alumni received a total of ten nominations across six categories, including breaking news reporting, excellence in feature and enterprise reporting for radio, and excellence in digital journalism.

Alumni Lien Yeung and Maryse Zeidler were part of a team at CBC British Columbia nominated for Best Breaking News Reporting – Print/Text-Based Online for coverage of the state of emergency during this summer’s wildfires.

Alumni Wawmeesh Hamilton and Lindsay Sample were part of the team from The Discourse nominated in the excellence in digital journalism category for Reconciliation in small Canadian towns, a collaboration with CBC Indigenous.

Adjunct professor Frances Bula was nominated in the business, industry and economics category for her story in The Globe and Mail, “Have Vancouver’s policies hindered rental housing more than they helped?”