Jared Ferrie graduated from UBC Journalism in 2005 and has since freelanced for international media from countries including Afghanistan, Pakistan, Sri Lanka, Sierra Leone, Guinea-Bissau, Philippines, and Nepal.

Ferrie was correspondent for Bloomberg in South Sudan during that country’s first year and a half of independence from 2011 to 2013. He was a Reuters correspondent in Myanmar as the country opened up to international media during political and economic reforms in 2013 to 2015. Ferrie then worked as the Asia editor for IRIN, an independent humanitarian news agency, which included reporting trips to Rohingya refugee camps in Bangladesh. His stories on military abuses of Rohingya civilians won silver at the 2017 UN Correspondents Association and honourable mention for human rights reporting from the Society of Publishers in Asia. 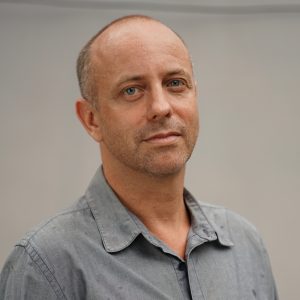 Most recently, Ferrie worked as a regional correspondent and editor at Thomson Reuters Foundation, based in Phnom Penh, Cambodia.

What brought you to UBC Journalism?

I’m actually from Vancouver, I was born there. But I didn’t grow up there. I’d lived elsewhere and then I went to Simon Fraser University for my undergrad. I studied communications and I realized by the end of it there was a lot of criticism [of media], which was good, but I think I was a bit of an older student and I wanted to be part of it, rather than sitting on the sidelines throwing rocks at the media. Actually, I wanted to work in the media. So I did a documentary film production class and a sound production class, and I started getting into the more practical elements. I wrote a couple things for the paper there as well. I started getting interested in being a journalist rather than talking about journalism by the end of my degree. I was very happy to get into UBC Journalism.

What was your biggest highlight during your time at the school?

I’ve watched over the years and the school seems to have expanded its programs and what it can offer students. What stands out for me is David Beers’ Feature Writing class. It’s a long time ago and I still remember the class. There were aspects helpful for news reporting and a lot of discussion and practice for getting more deeply into stories. At the time I thought — as many young journalists do — ‘I want to go into magazine writing and do investigations.’ In the end, most of us go into news reporting and then at some point later in the career circle around and get into more in-depth reporting — which is kind of where I’m at right now. That class sticks out.

Tell us a little about your thesis and internship experiences.

Rather than going to a local paper to do my internship over the summer, I was really keen to get overseas. I knew there was an NGO that doesn’t exist anymore called IMPACS and they were working in Afghanistan doing media development stuff at the time. As soon as I got into the [UBC Journalism] program I went to meet them, and the following summer they gave me an internship in Afghanistan. It was actually eight months. I started in the summer and I ended up staying there for the first semester of second year, and during that time I did research for my thesis. It was about media development and peace building in conflict using Afghanistan the example.

I came back for the second semester in January to finish up coursework and write my thesis. At the time, David Beers was starting The Tyee and I did some work with him. I then got myself to CBC in Toronto. I cold-called a producer, and I had an idea for a documentary. They were interested, but they ended up killing it. It was in Haiti and at the time there was a lot of violence and people were getting kidnapped. But they said, ‘Why don’t you come to Toronto?’ They gave me a couple months contract … Then CBC went on strike. I was there about a month and I just basically had to come back to Vancouver. I had to go tree planting again. I went on a contract planting on Vancouver Island and then got an email from Dave [Beers] asking if I wanted to help out with The Tyee’s coverage of Vancouver elections. I eagerly took him up on that. At that time, the great commuter paper war of 2005 was just starting. There were three dailies. So the editor at Metro was reading some of my stories in The Tyee and they had lost a reporter. Because of my Tyee reporting, I got an email from him and that eventually turned into a job at Metro.

How did you end up overseas after developing journalism experience in Canada?

I wanted to be a foreign correspondent, but I also wanted to make sure that I went into it with enough experience. I felt like rather than move overseas right away and start freelancing, I wanted to have at least a year or two working in a newsroom. So that’s what I did. I worked at Metro for about a year and a half and then I did a bit of work at CKNW because I wanted to get some radio experience. Basically, I spent two years running around Vancouver being a city reporter because I thought it was important to get that experience before heading out.

During that time, even when I was in Vancouver, I was taking every chance I could get to go overseas. The first time I took time off from Metro, I went to Sri Lanka. At the time the conflict was still going on with the Tamil Tigers and the government. I somehow managed to get into the area that the Tamil Tigers were occupying and I wrote a feature which ran in The Georgia Strait. It got nominated at the Canadian Association of Journalists (CAJ) awards. It didn’t win, but it was in there for best magazine investigation or something like that.

So I was already doing it, you know — I was trying to get my news room experience in Vancouver, while also trying to get overseas. I got a grant from the Canadian International Development Agency (CIDA) to do some reporting on Canada’s a role in Afghanistan. I went back for a couple weeks, and I filed a weekly story, which ran in Metro, but the trip was funded by CIDA. While I was in Afghanistan, I also started meeting with people and sussing out possible job opportunities and one of those came through.

Sometime in early summer I got an email from the person who was the head of the Institute for War and Peace Reporting in Afghanistan, asking if I wanted to come over. I worked with them, helping to train journalists in radio and print and editing stuff. I did a bit of freelancing. That job went for seven months and then I kept hopping around to wherever the work was. So I went from Afghanistan to Sierra Leone with Journalists for Human Rights, and again did a bit of journalism training and freelancing.

At that time, this newspaper called The National had launched out of Abu Dhabi. I remember reading about it in the business pages of The Globe and Mail because there were some Canadian connections. I remember thinking this is a big budget launch of a major paper in an era where foreign and newspapers are dying. So I was pretty keen to get in on that. So again, I somehow figured out who to talk to. They kind of tested me out on a story, it worked out, and the editor said, ‘Okay, we’ll take a story a week from you.’ At the end of my eight months in Sierra Leone I talked to the editor about where they would want someone. They wanted someone in the Philippines, which I knew nothing about, so I went there on a freelance contract. Then I ended up in Cambodia, East Africa, Myanmar, and most recently back in Cambodia. In most of those places I had contracts with a news organization, and sometimes I freelanced as well.

What advice do you have for journalism students looking to make a career reporting overseas?

It’s been such a strange and twisted path, but basically I quickly realized going into journalism school that the traditional route of getting to be a foreign correspondent was really not available. Even at that point — it’s probably worse now — media were shutting down their bureaus. So the idea of getting an internship at The Star or The Globe and then working your way up and five years later getting sent overseas … I just thought the chances of that happening are so slim. You have to just go do it.

That said, you have to be strategic because first of all, you’ve got to be able to make a living. You have to figure out where you want to go. There are a few variables there, like what country is cheap enough to live in and what country you have enough interest in that you’re going to be able to sell stories. What I always tried to do was get another gig on the side that would get me through … I’ve worked full-time for Bloomberg and for Reuters twice, and for IRIN, but other than that it’s been a lot of freelancing. As I mentioned, I’d done media development stuff, which is in an interesting way to go because you basically get to hang out with local journalists and get their perspectives on things. I’ve also done other things like a few election monitoring gigs. It’s a tough question because I don’t think there’s any formula except you have to just do it.

I would say that one thing that people could think about is to work for an English language paper in another country. In Cambodia there used to be very good daily newspapers. A lot of people would come in from Canada, the U.K., and the States as inexperienced reporters and get really good newsroom experience working at those papers. They don’t pay a lot. But you would get daily news experience and you’d be in a foreign country. Maybe you do it for a year or two and then you know the beat a little better and you could launch into your freelance career.