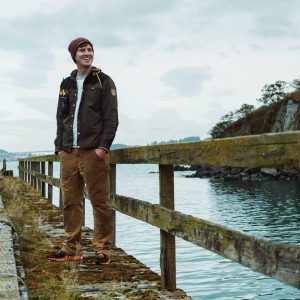 Jimmy Thomson is a Yellowknife-based freelance journalist and northern reporter at The Narwhal. Since graduating from UBC Journalism in 2014 he has reported from nine countries — seven in the Arctic — on topics ranging from war refugees to climate change to the Chinese environmental movement, and worked as a video journalist for CBC. His work has also been published by the Globe and Mail, Toronto Star, Canadian Geographic, Hakai Magazine, National Geographic and more.

What attracted me to the program was that Candis Callison was going to teach an investigative and science journalism course. That didn’t end up happening when I was there, but it still ended up being a really good decision; Candis mentored me throughout the program and led a directed study for me and one other student on investigative techniques.

I went back and forth for a long time before applying. In the end, I had actually applied at the last minute — so last minute that the reason I ended up getting my application in on time was that I missed the bus. I decided, “Okay, fine, I’ll just send my application to UBC,” because I figured I wouldn’t have gotten accepted. I never would have expected missing a bus to change my life.

What was a highlight of your time at UBC Journalism?

I don’t want to say what I’m sure everyone who did the International Reporting Program says, and say ‘IRP.’ IRP was obviously an incredible opportunity to build that confidence that it is possible to do important international journalism, and, here are the steps you can take to do that. To go to China and do that project was a really spectacular opportunity. Our team also won a fistful of awards for that project, and those have no doubt helped us along the way.

But I think what actually has been more valuable in my career was the Reporting in Indigenous Communities course. That essentially set the tone for everything that I’ve done since and has been completely invaluable in terms of being able to adequately and confidently do the work that I do.

My thesis was on a national marine conservation area in the Arctic. I already had an interest in the Arctic at the time and I had been to this place where they were going to create a park or a conservation area with a big hole in it and I wondered what the hole was all about, and so that ended up being my thesis.

Were you able to glean from some of Prof. Candis Callison’s knowledge while at UBC in terms of climate change and Arctic issues?

Yes, Candis’s perspective ended up being vital to my thesis. As anyone who’s dealt with her knows, she has an extremely incisive, I guess, way of looking at something. Like she can cut through a lot of information to get at the themes that you’re really going for. She pointed out some things that really brought my thesis to the next level and it’s something that I was quite proud of by the time it was published [in Maisonneuve Magazine].

What did you do right after graduating from UBC Journalism?

I got an award that doesn’t exist anymore, unfortunately, because I think it’s a really great program — the Norwegian High North Journalism Award. It was a fellowship put on by the Norwegian embassy in Ottawa and they paid for two grad students from Canada every year to go to Arctic Norway and work at a publication that still exists, but under different ownership, kind of, called the Barents Observer. I worked for a month and they put me up and sent me all over the region, which is a really amazing part of the Arctic. It’s northern Norway where it borders Russia, It also borders Finland and Sweden there too. So you can do a road trip into Finland and Sweden and come back two days later. My colleague Emma Jarratt and I got to really see a lot of the region, and then we were asked to come back as freelancers for a couple months in the fall. So we went there for a month in April and then came back in September for another two months.

How did you land in your current position at The Narwhal?

I think like a lot of careers it’s been a series of accidents and opportunities. After the Barents Observer I started working a the Hakai Institute. I started developing video skills there. In order to take that job, as a side note, I had to turn down another fellowship — a grant from the International Development Research Council, which also doesn’t exist anymore, to go to Central Asia and do some stories on dams there. So, that was kind of a hard choice to make. But I went to Hakai Institute because it was a steady job and I worked there for about a year and a developed video skills there that ended up being essential to get a job at CBC.

I got this job at CBC North and came up to Hay River, which is a little town in Northwest Territories, just north the Alberta border, and I was pretty miserable there. It’s a very small town. It’s very conservative. There’s not much going on. I worked there for a year and a half pretty unhappily and then moved to Yellowknife. I left that job with no other real job in mind. I knew the people who founded The Narwhal — at the time they ran Desmog Canada — and I knew they liked me and they would give me work. Somehow I got in touch and it just so happened they were preparing to do this rebrand and relaunch of their website as The Narwhal. I started working with them throughout that process and it’s been about a year and a bit now.

Those video skills from Hakai are now coming in handy again, because my main project I’m working on [is] videos about entrepreneurs in the north. But I didn’t see that coming. I didn’t even do the advanced video course at UBC. I had no idea I would do video.

What are some of the other skills and takeaways from UBC that have served you since graduating?

One major benefit has been the network from UBC. I talk to Kathryn [Gretsinger] often, still, on the phone or when we find ourselves in the same place. I have friends that work at a number of publications and are doing really interesting things, and that has occasionally led to collaborations, like with the UBC Global Reporting Centre’s forthcoming project on alcohol use.

What I really got out of UBC, even more than the instruction, which I thought was phenomenal, was time. I got two years to pitch to organizations without worrying about needing to pay the bills, with people who could help me work on my pitches and with the understanding that I was still a student. The internships that I did, the constant thinking about journalism and what it’s supposed to be and how you’re supposed to do it while also working. I really just can’t stress that enough — how valuable it was to actually try to work as a journalist while in journalism school. I think that’s not necessarily something that’s emphasized a lot in journalism school — is that you should be out there pitching because you’ve got time, right? You’ve got support, you’ve got time, you’ve got other peers. So I wrote for a number of magazines and other publications outside of my internships was at UBC and it was really key to developing those skills and contacts and a portfolio.

You’ll make mistakes — professional, public. I mean all your mistakes in journalism are public and you’ll make them. Sometimes it’ll be something like correction, sometimes it will be a fight with your boss or a career decision you regret. But if you have the good fortune to be able to continue and keep working at it, those mistakes start to become learning opportunities instead of disasters. Also be nice to your peers. Work with them. They’ll be your colleagues someday.