Journalism internship in the north expands horizons for UBC j-student 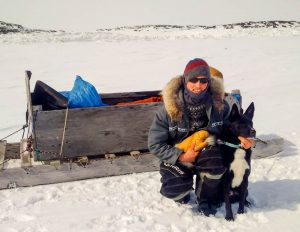 When the time came to line up his summer internships, UBC Journalism student Marc Fawcett-Atkinson knew where he wanted to go — north.

With the support of a $5,000 award for forestry, sustainability and agriculture reporting in B.C. and the Yukon, Fawcett-Atkinson was able to chart his own path.

He embarked on a four-city reporting tour, including a month in Prince Rupert and two weeks in Whitehorse, made possible by the grant. He also interned at Uphere magazine, with stints in Yellowknife and Iqaluit.

Having previously studied human ecology and worked as an outdoor guide in Iceland and the Yukon, Fawcett-Atkinson is fascinated by how people interact with land.

“A lot of that happens through agriculture, forestry,” he said, “and then how people create systems and narratives to justify why they should be able to use them, why they shouldn’t.”

The forestry award offered Fawcett-Atkinson the chance to expand his horizons, applying his academic background and outdoor experiences to journalism.

When he applied for the funding, Fawcett-Atkinson pitched the idea of reporting on biomass fuels — specifically on pellets made of mulched and compressed wood left over from logging operations. The wood pellets are being developed and exported as alternative fuel sources to markets like Japan and China. From there, he reached out to newspapers that could be a good fit.

Prince Rupert, he thought, “would be an interesting conjuncture of shipping [and] ocean, but also it’s in the heartland of timber and resource extraction in the province.”

Fawcett-Atkinson spent three and a half weeks at The Northern View in Prince Rupert, which usually only has three full-time staff.

“Having such a small team meant I could kind of jump in on everything. They gave me a lot of leeway to work on my own stuff, which was great,” said Fawcett-Atkinson. He split his time between daily news, local features, and chasing down stories on the growing pellet fuel trade.

At Yukon News in Whitehorse, Fawcett-Atkinson reported on how communities are adapting to the impacts of climate change, including flooding, permafrost melting, and forest fires. Based in the territorial capital, he helped serve Yukon News’s broader audience too.

“They were very good about being open to pitches or providing support in terms of who I want to talk to, and editorial support,” he said.

Opportunities at a small paper

Fawcett-Atkinson encourages other journalists and students to think creatively in choosing which locations to become immersed in and report from.

“Think of the craziest thing you can think of and just go for it. For me, I wanted the opportunity to travel more around Canada,” he said. “I almost got like an ethnographic viewpoint into these communities. Especially in [Prince] Rupert.”

“You’re in an interesting position when you’re at a small paper. You do see everything that’s going on.” For him, “it’s almost like making a map of what makes these small communities tick.”

Having returned to Vancouver for his final year at UBC Journalism, Fawcett-Atkinson is undertaking a final research journalistic project that continues his exploration of how people use and relate to land.

“Being able to go to those places and start to build a bit of a network,” he said. “Even if I don’t have an idea right now, it’s going to be an invaluable resource to draw from.”

All UBC Journalism students must complete a minimum  12-week professional internship as part of their degree. The internship offers students an opportunity to apply their classroom lessons and gain experience of working in a professional setting.

The internship placement is usually undertaken in the spring and summer after the first two terms of the program are completed. Students work in any medium, in Canada or internationally.