Matthew Parsons graduated from the School of Journalism in 2014. He’s now an associate producer at CBC Music in Vancouver, having worked several contract roles since joining the CBC team after graduating. His role involves research, writing and audio editing for CBC Music’s radio programs including Saturday Afternoon at the Opera. As well working on classical music shows on Radio 2, he writes classical-related stories for the CBC Music website. 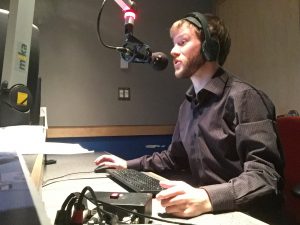 I came to the SOJ straight out of music school with pretty much no journalism experience. A couple of music reviews in the University of Alberta’s student paper were about the extent of it. The portfolio I submitted in my application consisted of those, plus an essay about Ulysses — an absolute Hail Mary.

So j-school taught me literally all of the practical skills that I have, from the ground up. I arrived there with not much more than a bit of specialized knowledge and I left with interviewing skills, audio/video editing skills, a feel for what makes a good story, and the ability to write sentences that make sense. I still suck at pitching, but that’s my own fault. Also, the SOJ’s internship program resulted in— this is not an exaggeration — 100 per cent of the work I’ve gotten since I graduated. I spent six weeks at CBC Radio 2, where I now spend the bulk of my time, and another six on Radio 1, where I’ve worked on a casual basis for two years.

It pays to specialize. Journalism is often regarded as a career for generalists, but it’s totally possible to make a living in the media covering a niche interest.

Would you recommend the j-school to aspiring journalists? If so, why?

Absolutely. It’s a great way to learn practical skills while spending two years pondering the deeper questions that face modern media. If the SOJ can poop me out as a functioning professional journalist, it’s likely to have an even easier time with just about anybody else.