Matthew Ramsey graduated from UBC Journalism in 2005 and currently works as the Director of University Affairs for UBC Media Relations.

Here’s what Ramsey had to say about his time at UBC Journalism and beyond:

What was your path to UBC Journalism? 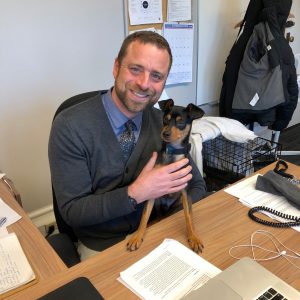 I finished an undergraduate degree at UVic in 1997. I did the co-op program in what was then called the creative writing department. That co-op program placed me at community papers in Victoria and later in Dawson Creek. I absolutely fell in love with journalism. I loved the chase of the story, seeing your name on the byline, and actually watching the newspapers roll off the press. Kind of a romantic ideal, right?

Then I worked for another ten years at community papers and later at a TV station in Victoria, where I was a senior producer. Throughout that whole period of time I’d been really trying to figure out a way of transferring my community news and TV experience into daily newspaper work. I applied and I applied and nobody was giving me a second glance. I never got an interview. So I thought to myself, “How am I going to break into this area?”

Someone suggested I go back to school … I applied at UBC and took a course with Patricia Graham and Valerie Casselton who were teaching there at the time and who happened to be editors at the Vancouver Sun. Low and behold I got an internship at the Sun and I ended up working there, which was fantastic.

Then I applied and was given an internship at The Province newspaper. It was so amazing I decided I wasn’t going to go back and finish my degree. But common sense prevailed and I ended up completing the degree and working full time at the same time. It wasn’t that bad! I think it wasn’t bad because I’d been a working journalist for ten years before I got to UBC. I knew what the drill was. The school part was just kind of fun. It wasn’t totally onerous. It was more a chance to think for a while, rather than being on deadline all the time.

What was the biggest highlight of your time at UBC?

The biggest highlight for me was having a chance to flex my intellectual muscles and work on really long-form journalism in David Beers’ class. He knew that I had prior experience and he upped the assignments to make them more challenging for me, and gave me leeway to complete those assignments in a way that I was really happy with. I really got a chance to just think about what I was doing, why I was doing it, and the potential impact that journalism can have in the world. That was an empowering experience, and it reminded me that what I was doing was important and made me feel confident in the way I was doing it.

What was the biggest challenge while you were at UBC?

Writing the thesis was a real challenge for me. My thesis was about the form and function of the Vancouver police department’s media relations team and how it evolved over the years. I hadn’t done any academic writing before and at the time when I was in the program, the thesis, was an academic exercise. We weren’t doing long-form stories or documentaries at the time. Wrapping my head around academic writing was at times confusing, and Mary-Lynn Young, my advisor, was excellent in helping me through that process. She’s really focused on making sure that your work is the best it can possibly be.

Where did you work after graduating from UBC?

After I graduated, I was full time at The Province. I ended up working there for six years, where I was a general assignment reporter (but mostly focussed on crime and mayhem). Then I was the assignment editor, which gave me a real different sense of how newsrooms function. Rather than just working on one story, you’re actually in charge of all of them and tasked with making sure nothing is missed. Then I went to the CBC in late 2008 as a senior producer. I was hired to produce their new news show, which was canceled six months after I arrived, but I kicked around the newsroom for a little bit and then I was the assignment editor/producer there for two and a half years. Then they put me onto producing the weekend news. I left the CBC 2014 and I came to UBC.

How did you decide to make the shift into communications?

I was sort of looking, wondering about whether I could stick in news. At that point I’d been doing it for 20 years. The hours were challenging for my family at the time, and the subject matter that we were covering was becoming challenging for me on a personal level. I was looking around for something in media relations or PR. I didn’t want to do big tobacco or handguns or anything like that. UBC popped up and I thought that’s an organization I can certainly get behind.

How do skills you learned at UBC Journalism relate to your media relations work today?

It’s the ability to think critically about a situation and to move very quickly in writing and assessing large volumes of information, to find what are actually the most important nuggets. It’s a skill I use every day. I had that before I went to UBC, but it certainly was honed at UBC, and then more so following my graduation, in the newsrooms. Also, challenging yourself to look at issues and events through different lenses, rather than, “This is what happened and this is the who, what, where and why.” It’s really looking at events from alternate viewpoints and a forward-thinking editorial approach.

I would suggest to prospective students wondering if they should or shouldn’t that they should challenge themselves with the program. The value of the degree I received opened all kinds of doors for me that wouldn’t have been open previously, and enabled me to shift my career to what I’m doing now in a way that wouldn’t have been possible had I not had that degree. I would also suggest to anybody who wants to be a student at UBC Journalism to not just write for class — but to think more broadly. Pitch stories to local media, get their names known while they’re still students, so that when they do graduate, they have established relationships with newsrooms that they can move into.