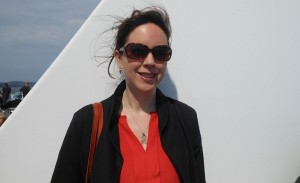 Merrilee Hughes graduated from UBC Journalism in 2001. After graduation she spent some time freelancing before returning to her roots at UBC. She taught in the UBC medical program and worked as the research coordinator studying online health in the School of Population & Public Health before being recruited as the grant facilitator at the School of Nursing.

Hughes later spent a year seconded as the research network manager of a national Movember-funded Men’s Depression & Suicide Network based at UBC. She developed knowledge translation strategies across five intervention projects tailored for men experiencing or at risk of depression and/or suicidal ideation.

Currently, Hughes works as the research grants and knowledge exchange manager at UBC’s School of Nursing. In spring 2019, she was honoured with the School of Nursing Centenary Medal of Distinction, created to mark the celebration of the School’s 100th Anniversary. The medal recognizes individuals who have brought high honour to the school and/or to the profession of nursing.

Here’s what Hughes had to say about her time at UBC Journalism and beyond.

When I was doing my science degree at UBC, I always knew I loved writing. I used to joke that I was the only person I knew who would pull out a thesaurus to write a lab report. So, when I was thinking about what to do after I finished my undergraduate degree in Medical Laboratory Science, I was looking for ways to go wider rather than into an increasingly narrow area of focus. The School of Journalism was at that point very new. I thought this might be the ticket to be able to stay really engaged with research and scientists, but not have to narrow my focus to a single area of research expertise.

When I submitted my application, I had to submit a news story, which I’d never done before. In hindsight, it was probably still a fairly technical article, but it was a first attempt at shifting to a more general audience. Being in the School of Journalism for a couple of years really strengthened my skill set to do that wider science communication work.

The School was especially appealing because it allowed me to maintain my science specialization. One of the things that I was really interested in was pharmaceutical reporting. One of the first things I did was pair a rigorous fourth year pharmaceutical sciences course with a directed studies with UBC’s Therapeutics Initiative group. It was an inside view of how to evaluate drugs and how they’re being prescribed relative to what the evidence actually supports. So, to pair that kind of rigorous scientific mentorship at UBC with journalism training I think is such a rare combination. Where else could I have gone to get that kind of training?

How do the skills you developed at UBC Journalism serve you today?

It serves me really well in my work today. Increasingly we’re seeing peer review committees and review panels that are interdisciplinary and sometimes even incorporate members of the general public. The researchers I work with are international experts in their areas, but they have to speak about their work in an accessible way. I think storytelling in grant writing has been increasingly recognized as valuable – not just to share the information – but to really engage a degree of interest and excitement for the work and its possibilities.

While I only stayed in traditional journalism for a short while, doing freelance magazine and community newspaper writing as well as a short stint with a production company, I found that returning to the field of health research with a journalism degree to compliment my bench science background was hugely valuable. Being able to quickly engage with experts on diverse topics, synthesize and condense the core story, and produce compelling content across a variety of mediums has marked a profound change in the direction of my career.

What’s the piece of work you’re most proud of?

I still save the newspaper and magazine clippings and the old VHS tapes of my first foray into TV news, but I think some of my proudest work has been in shaping print and video research proposals that inspire confidence and financial commitment from expert peer-review committees. The first time I worked on a grant that was successful in securing over $1 million for a research project was very satisfying.

What advice do you have for prospective UBC Journalism students?

Embrace a “yes” philosophy. I didn’t know exactly where I was going with journalism, but I had many different opportunities that presented themselves while I was at school. I did just say “yes” to them all early on, while I was getting a flavour for what direction I might want to go next. I had a chance to work with a production house in Vancouver and I had some really great exposure around documentary filmmaking.

One of the reasons I’m in the role I have now is because one of my journalism professors, Dr. Stephen Ward, was being contacted by colleagues around campus saying, “Hey, you’re a journalism prof, how about you be part of this study and help us write this grant?” And he said, “I know this great science reporter who might be interested.” I kept getting these small contracts after I graduated to help researchers write their grants. When I started doing the journalism program, I didn’t even know such a role existed. I stumbled on this need within the scientific community and realized it was such a nice fit for the kind of a technical yet narrative writing that I like to do.

I think coming back to the scientific community with a journalism degree really made people’s eyes light up, like, “Oh, you talk science and you can write.” Repeatedly, I’ve had people express enthusiasm around that combination I bring.