A new book by School of Journalism professors Alfred Hermida and Mary-Lynn Young traces the growth of data journalism as a subspecialty in a profession that is still responding to the disruptive effects of digital media.

The book, Data Journalism and the Regeneration of News, published by Routledge, identifies an increasing number of professional identities, tools and technologies, educational opportunities, as well as new forms of collaboration and computational thinking.

Hermida and Young base their analysis on five years of in-depth field research, largely in Canada. They find that data journalists, particularly in well-resourced newsrooms, are able to address issues of trust and credibility to advance their professional interests, operating as institutional entrepreneurs.

Read an excerpt from Chapter 4: The materiality of data journalism 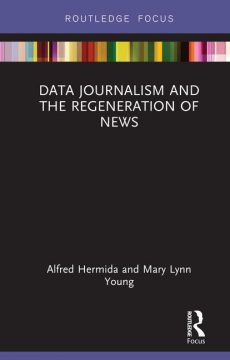 Overall, a review of the technologies in the field reveals how far journalists are making do when it comes to data journalism, often relying on do-it-yourself approaches that are themselves shaped by the nature of the artifacts available – from Microsoft Excel and Access to Google software. The prevalence of certain types of data visualizations used in newsrooms – maps and charts – signals how the technology used by journalists has been shaped by historical and social routines and practices in the newsroom. As journalists are required to work across mediums and be more digital, maps and charts are quick and easy ways to create visual elements for online stories.

Maps matter as often they are the most visible aspect of data journalism. Cartographic visualization representing information in a spatial domain is seemingly everywhere in data journalism. Our study of 26 Canadian projects that were finalists or winners in major data journalism awards shows a predominance of maps (Young, Hermida & Fulda, 2018). Dynamic maps were used in just over half of the sample – 14 of the 26 projects. More importantly, nine of the 14 maps relied on Google Maps. The platform provides a free and accessible methods to create dynamic maps that would otherwise require significant investment in people, training and time.

Other studies that looked at data projects through the lens of awards found a similar predominance of maps. Just under half (49.8 per cent) of the 225 projects nominated for the Data Journalism Awards from 2013 to 2016 included a map (Loosen, Reimer & De Silva-Schmidt, 2017). The results are significant as the awards handed out annually by the Global Editors Network are considered as the “gold-standard” of data journalism. Another analysis of 44 winning entries of the Global Editors Network’s Data Journalism Award from 2013 to 2016 noted that most of the projects (77 per cent) used annotated graphics and maps (Ojo & Heravi, 2018).

Mapping was used in 27 out of 31 data journalism projects nominated in the Nordic Data Journalism Awards in 2013, 2015 and 2016 (Appelgren, 2018). They included 14 interactive maps, nine static ones and four map videos. The awards are considered to represent the forefront of data journalism in Nordic countries. Mapping also emerged as the data tool of choice in an earlier study of the development of data journalism at seven Swedish traditional media organizations. Maps were the go-to method to visualize data, so much so that “in almost all of the interviews the editors described maps as the standard visualizing method for data journalism projects” (Appelgren & Nygren, 2014: p. 403).

The other common form of visually representing data is charts. Bar charts are considered as “the old reliables of the field – always useful, always being used, always there when you need them” (Kirk, 2016: p. 31). In our study of award-nominated Canadian data journalism, graphs were the second most common technique used, appearing in nine of the 26 projects, second to the use of maps (Young, Hermida & Fulda, 2018). Other studies of award winners or finalists have found similar results. Static charts appeared in 60 per cent of the nominees for the Data Journalism Awards from 2013 to 2016 (Loosen, Reimer & De Silva-Schmidt, 2017). A significant number of winners of the award – 34 out of 44 – over the same period used annotated graphs and maps for interactive data storytelling (Ojo & Heravi, 2018).

The widespread use of charts goes beyond investigative, in-depth data projects. They are a regular feature of daily data-driven journalism. Bar charts were by far the most common visualization tool used on the websites of three German-language and one British legacy media organizations – Zeit Online, Spiegel Online, Neue Zürcher Zeitung and the Guardian (Stalph, 2017). Bar charts accounted for 167 out of the 510 visualizations analyzed, with maps coming in a distant second at 83. Moreover, almost half of the charts lacked any interactive features, meaning the data could not be manipulated in any way by audiences. Compared to longer-term data projects, in everyday data journalism, “bar charts remain the most accessible and easily employable data representations – particularly considering the time pressure of daily journalism practice” (Stalph, 2017: p. 15).

Easy-to-use tools influence editorial choices to create cartographic visualizations or bar charts as relatively few specialist skills are required from journalists. Moreover, both formats can be considered as a continuation of historical journalistic norms and practice. Maps have been a mainstay in print newspapers as a way of conveying visual information to readers. Monmonier argues that “as a cartographic genre, news maps reflect the objectives and values of journalistic institutions. They are timely and narrowly focused, and present highly selective views of whatever portions of the globe editors deem noteworthy” (1989: pp. 16–18). Maps provided a way to break up the monotonous gray of newsprint, particularly at a time when newspapers were facing increased competition from the visual medium of television news (Monmonier, 1989). A study in 1986 of 30 daily U.S. news- papers found that maps made up just under half of all graphics, usually to show the location of a news event (Smith & Hajash, 1988). And a survey of 125 U.S. newspapers in 1997 showed that almost all (95.9 per cent) said they regularly published maps (Utt & Pasternak, 2000). Mapping addresses one of the five Ws of journalism – the “where” of news – with the aim of helping readers understand the geographical context of a story (Griffin & Stevenson, 1994). Maps also offer journalists a way to surface patterns through the spatial representation of information, making connections that might otherwise not as apparent and revealing the story in the data (Vallance-Jones & McKie, 2017). Mapping, then, aligns with one of the key pillars of journalistic practice of identifying the geographic component of a story.

Similarly, charts have been a mainstay in print newspapers. Bar charts came second to maps in the 1986 study of U.S. dailies (Smith & Hajash, 1988) and were regularly published by two-thirds of the newspapers in 1997 (Utt & Pasternak, 2000). Much as with maps, bar charts have a long history. One of the pioneers of the field, Simon Rogers, cites an 1858 bar chart by Florence Nightingale on mortality rates among soldiers as an early example of data journalism (Rogers, 2010). In journalism, charts serve to uphold and reinforce journalistic values of objectivity and impartiality. Barnhurst (1994) points out that charts representing a seemingly neutral reality as numbers are portrayed as objective facts. He highlights that “charts are signs, not reality. They seem concrete because of the doctrine of graphic correspondence. Charts propose to represent the world first by measuring it and then by displaying those measurements in ink and space on paper” (Barnhurst, 1994: p. 36). A historical perspective highlights how easily available or free digital tools cannot simply account for the prevalence of maps and charts online, but rather they come out of broader professional conventions and practices. In fact, the affordances of technologies like Microsoft Excel and Google Maps create favorable conditions for the adoption of these two formats of displaying information.