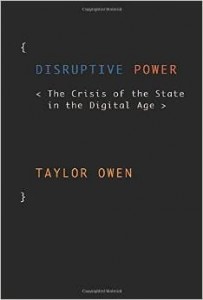 Owen’s book, “Disruptive Power: The Crisis of the State in the Digital Age.”

If Taylor Owen has it his way, people from all over the world will be able to experience the news from their living rooms.

Owen is working on a form of virtual reality journalism that will debut at this year’s South by South West conference, which is known as the premier venue to discuss innovation in the arts.

He works collaboratively with the journalism school and the Liu Institute for Global Issues as an assistant professor specializing in global studies and digital journalism.

His experimentation with digital tools and techniques helps to keep the j-school at the forefront of the changing journalistic landscape.

Owen’s background is in international relations and geography, but his work has intersected with journalism throughout his career.

At the Tow Center for Digital Journalism at Columbia University, Owen worked with journalists and academics to test new tools to see how they could be used to tell stories. Owen is also the founder of OpenCanada and author of, “Disruptive Power: The Crisis of the State in the Digital Age.”

Now he is bringing that expertise to the UBC School of Journalism and is challenging students to think about what journalism is and how to innovate within the field.

Here’s what Owen had to say:

How do your previous experiences, such as working with the Tow Center or starting Open Canada, inform the way you teach journalism?

I think that ultimately I come at the field of journalism with a slightly different set of experiences and assumptions than my colleagues who have had these remarkable careers inside traditional journalistic institutions. I see and have experienced those institutions from the outside, as a consumer of news and journalism and increasingly as someone producing research and media content that seeks to engage in the same space. We are beginning to see a far more fragmented media environment, where the incumbent institutions are one voice among many in this really rapidly shifting journalistic space.

We can think of this new ecosystem as a spectrum: traditional media organizations like The Globe and Mail or The New York Times or CNN; first-generation digital companies like Huffington Post; new second generation digital companies like Buzzfeed, 538, Vice, First Look, and Vox; single subject news sites like Inside Climate News, Syria Deeply, Bleacher Report and OpenCanada, that deep dive on one topic; a vast network of individuals, companies, non-profits starting their own media streams, brands, and producing content; and finally and perhaps most importantly – citizens who now have the means to document the world around them.

That’s a full spectrum of organizations. They all have different agendas and practices that we need to understand. Starting out in journalism, now, or in media generally, you can choose where you want to participate, and I would love to help people navigate how to engage in that world.

What kind of skills would you want to see students coming out of the program with?

I think for the vast majority of people coming out of a journalism program, their career is going to look quite different than it did even five years ago or 10 years ago. That’s fine. There’s all sorts of ways people can act as journalists in the world. The baseline remains constant – students need to be able to tell stories and to think critically about the world.

There are new skills that are valuable in this new ecosystem. A degree of entrepreneurialism; a fierce curiosity and willingness to challenge assumptions and beliefs and institutions; an independence of voice – where someone really willing to put themselves out there and have their own voice and create their own identity – I think is really valuable. And one I feel very strongly about is an ability to create, not necessarily an expertise, but a knowledge of a space.

When I look at the most successful young journalists in North America, certainly, they’re the people who have carved out a niche for themselves as knowing everything and everybody in their particular topic combined with a mastery of form, whether it be writing, computation, social media, podcasting or video.

I know one of the skills you focus on is data journalism. How does developing that skill set help students get a job?

The first thing is that a big part of existing in this fluid journalism space is engaging with practice and engaging with where the practice is going. You have to know that this stuff exists – just like you should know what good radio is and you should know what good video is. It doesn’t mean you have to do it, but you need to know it exists and need to understand why it’s important and why it’s having an influence.

Second, it is immensely valuable to be able to work seamlessly with computational journalists. There is a need for people who can sit at the intersection of more traditional forms of reporting and programming – this is a space that is ripe for new young journalists.

It used to be that visualizations or mapping was just an add-on to journalism, which was done using other methods. Now you’re getting this real push towards computational methods as a journalistic method. This is through people doing investigations and trying to make sense of huge data sets using computation as a reporting tool, not just a presentation tool. Understanding this shift is of tremendous value.

Considering all the new technology and tools out there now, what excites you most? 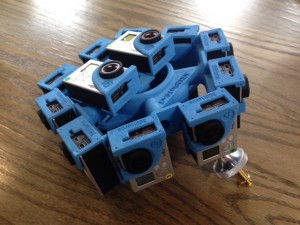 One that I’m very involved in is around virtual reality. In the next year VR will emerge as a consumer product. It’s a new platform for content, and we know that movies and gaming and all these things are going to be using it, but what’s increasingly apparent is that journalism will be using it, too.

If the goal of journalism is to bring an audience to another place or to experience the life of someone else, or to tell a story, then the ability to take them there in this 360, 3-D environment is incredibly powerful. This raises fascinating questions around representation, the place of the journalist, and the linearity of storytelling.

But what’s most interesting about VR to me is that it is not just an introduction of a new technology to the traditional practices and methods of journalism. In this case VR changes the practice itself. And this is where I think the interplay between technology and journalism is most important. We need to ask which technologies don’t simply augment our current practice, but which ones force us to rethink how we do journalism, and what it means to be a journalist. Or, which technologies change what we think of as journalism?