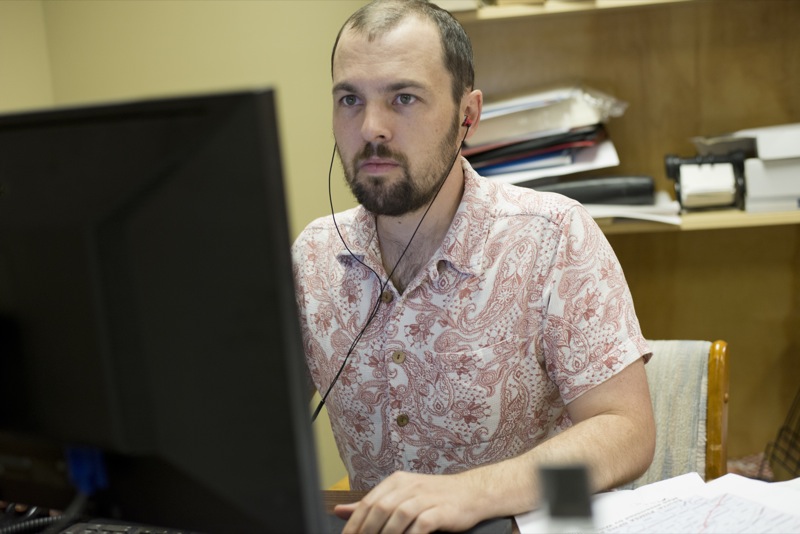 Sam Eifling graduated from UBC Journalism in 2012, having previously contributed to platforms including The New York Times, Harper’s and ESPN. He spent most of his time at UBC Journalism exploring new mediums and taking an active role in the International Reporting Program. Currently, Sam is working as a news producer on the Netflix show Patriot Act with Hasan Minhaj. Eifling told us about his current role and reflected on his time at UBC and how it prepared him for the real world of journalism:

Tell us about your current role with Patriot Act.

It seems like I graduated not that long ago but it’s been six years. Even in that time it would have seemed weird if somebody said, “Hey, your job is going to be investigative reporter for an internet comedy TV show.” The job didn’t really exist very long ago. But it’s also a lot of familiar reporting, research, and communication skills just applied to a different medium that I think everybody is trying to figure out exactly what it is. What is timely news-based TV on an internet streaming platform?
What’s your day to day role like?

My title is news producer, which can involve a lot of things. I research and pitch stories, find sources to talk to on background and make sure whatever premise we have for the story is sound and is in that sweet spot of provocative but also grounded … You really need to have an existing body of footage and news coverage you can use to build your story and show on. So if something has never been covered by television we just really can’t cover it, but it still leaves a lot of room to essentially do what a New Yorker article would do about a topic that may be in the public sphere, may have been talked about, but either hasn’t been analyzed in the way we want to do it, or no one’s made a really provocative case around it. A lot of my job entails figuring out what we can say, how far we can push something, and then working with the writers, working with the graphics team, working with the host and showrunner, who turn all that research into often what’s a multi-hundred page document by the time we’re done.

It’s really trying to shepherd as many divergent and various elements onto television, which is kind of crazy in itself. We tape live in front of an audience. It does have some of the traits of life TV, which is different for a streaming platform. We’re on Netflix, which doesn’t do a ton of shows with the kind of turnaround we have. We could be among the fastest turnarounds they have. We’re always trying to stay as close to the news as we can but still build it in a way that’s evergreen, in a way that a magazine or documentary would. We’ve only been through one show cycle so far, I would say a month would be fast, but it could be a couple of months [to produce an episode].

How does your j-school experience help you in your current role?

The lessons I carried out of International Reporting defy listing. Our project focused on targeted killings of Indigenous leaders in southern Brazil, and every aspect of it — identifying the story and its characters, reporting in a hostile environment, navigating Portuguese — was a challenge. But I can summarize the main takeaways in three sentences. Try to over-prepare, even if there’s no such thing. Keep your head way, way down. And on the off-chance federal police pick you up on trumped-up accusations of visa violations, have a list of emergency numbers handy, and call ’em all.

IRP is also a situation where you’re doing a bit of everything. You’re doing some shooting, editing, scripting, you’re reporting and producing. All those muscles you can start to build up in that program. Specifically, for me, having an area of expertise in the project that we did actually comes in handy when we talk about Brazil in the [Patriot Act] office because I don’t think anybody else on our team has done boots on the ground reporting in Brazil.

What lead you to UBC Journalism?

My experience differed from most of my classmates in that UBC was for me a way to reset my journalism career. I’d worked in print for years, with a decent amount of success, only to watch newsrooms shed jobs and a website I helped edit get sucked under when the economy faltered. While others of my colleagues left journalism for law, public relations and marketing, I doubled down. My master’s guided me into new realms — radio, video and documentary — and gave me access to international reporting experience (not least by the simple fact of my moving to Canada). I’ve since found that even print editors appreciate the breadth of those experiences, because emaciated newsrooms expect young journalists to adapt to multiple platforms.

Three stand out from my time at UBC. One is the International Reporting short doc on Brazil, which ran on the New York Times site. A second was my thesis, about the perils of claiming innocence in parole hearings. It ran on the Tyee, as did a short doc about a prostitute in Vancouver and her difficulty transitioning out of sex work.

Some of the dire clichés about journalism amount to nothing more than hyperventilation: The craft is strong, and our tools have never been better. That said, this field is not easy, consistent or particularly lucrative. You’ll get the most of out the School of Journalism if you also take advantage of UBC, where you can learn from world leaders in such fields as climate science, sustainability, urban planning, Pacific studies and other areas guaranteed to shape the next century. If the university supports your interests, the journalism program will help you explain them to the world at large.

What’s your advice for journalism graduates looking to get into video or television?

Having worked in print, digital, and in various parts of TV, TV is by far the most collaborative, multidimensional of those beats. As a print reporter, either on a magazine or a newspaper or a website, I could essentially run my own little world. I could have an idea, find the sources, write the story, even take the pictures and help package it, help write the headline. Everything that goes into it I would have a ton of input on. And obviously have editors who were there to improve the work, and I’ve been that editor as well. But the number of people who touch an episode of this show I work on, even before we ship it to Netflix, is probably … a given episode might be a hundred people between all the news team, the writers, the graphics team, the production crew and people wrangling the audience. It’s amazing to see how many people can touch an idea and need to make it a reality. If somebody’s interested in TV, the one thing you could do is go to a place where you have to do a bunch of different jobs. You work at a small town CBC affiliate for instance, you’re just going to have to do a ton of stuff. If you get to the point where you’re scaling that up to being in charge of production or being in charge of newsgathering or hosting or anything you want to do in that realm, having an understanding of what other people’s jobs are will not only make you a better employee, a better coworker, but you’ll understand more about everybody’s stresses and capabilities. That’s my learning curve right now, is paying attention to what people are doing around me.