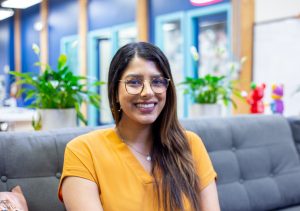 Simran Singh graduated from UBC Journalism in 2017 and currently works as a senior staff writer at the Daily Hive Vancouver.

Singh also completed her undergraduate degree at UBC, double majoring in political science and english literature. She interned at CBC Toronto during her time with the journalism school, before settling in at the Daily Hive.

Singh’s storytelling centres on cultural representation, highlighting stories in marginalized communities in Metro Vancouver. She completed a final research project (FRP) on campus sexual assault and is now making her way through a list of stories she wants to tell from the South Asian community.

Tell us what stands out for you during your time as a student.

One of the memories that always sticks out is publication day for The Thunderbird. That was always stressful but a great point of view of what it’s like to work on a deadline and how much work goes into it. I really grew fond of Frances [Bula]. I remember during the first few weeks of classes, I was so intimidated by her.

But she became my mentor and my research supervisor [for my FRP]. She is an incredible journalist and  I learned a lot from her, especially during my FRP. I really look up to her and respect her.

And then there were a couple projects where we just had to go do a streeter or talk to somebody random. It really put me out of my comfort zone, but it taught me a lot about how to present myself as a journalist. You can’t have any kind of wall up. You just have to do it.

What skills do you still carry with you?

Definitely fact checking, going back to your sources, having multiple points of view, putting in time and effort into a piece… One thing that I learned: it’s better to be right than to be first. Those are just a few of the core rules of journalism that we developed during our time at J-School. Now, whenever I make a mistake at my job, I always write it down and go back to what I learned at school because those skills are what I consider the “pillars” of journalism.

What are your favourite stories to tell?

I love telling stories about the South Asian community in Metro Vancouver — or in Canada. I really thought about what I wanted to focus on a few months ago, and Farhan [Mohamed], who’s our editor-in-chief, said, “I want you to tell more stories about your community. You’re so passionate about it on Twitter. Why don’t you write about it more?”

At first, I was hesitant because I didn’t want to pigeonhole myself into telling stories and become that journalist who only writes about their community. But after some reflection I realized there is absolutely nothing wrong about that. There are so many amazing narratives to share about South Asian folks in Metro Vancouver and many times the only stories that make headlines are ones about violence and crime. My goal is to showcase how dynamic, engaging, and incredible my community is through my reporting.

What advice would you give to young journalists — particularly young minority journalists?

Really believe in yourself and in the stories you want to tell. Believe your idea is going to lead you somewhere and really have faith in what you’re doing. A lot of the time, we struggle with really believing that we’re valid. There’s a lot of imposter syndrome when I read tweets from young journalists, saying things like, “I’m not good enough.” You are good enough. And your stories are important.

And I don’t think we should ever be ashamed to tell stories about our community because we’re scared of being “that Indian reporter” or “that Asian reporter.” I feel like right now, in journalism, we’re kind of at a shifting point. These narratives of ourselves or others that we connect with are so important in a world filled with a lot of hatred, a lot of racism, sexism, homophobia… And when we make these connections through our stories, we’re patching up those fragments of hate. Storytelling has gone on for generations and that’s how people connect. Keep at it, and if you don’t find your niche right away, that’s okay. Just keep on going, make those connections. There’s a reason you are where you are. And it’s because you’re valid.