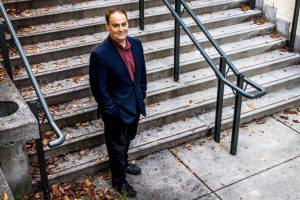 Carvin, who is teaching Visual Journalism at UBC this term, rose to prominence while serving as senior social media strategist at National Public Radio (NPR), using social media to report geopolitical upheaval, from the September 11 attacks to the Arab Spring.

He carved out his role curating Twitter feeds and verifying breaking news originating on social media from the Middle East and North Africa. Most recently, Carvin served as senior editor-at-large for the social video platform NowThis.

Before  joining NowThis, he was founder and editor-in-chief of reported.ly, a social news initiative at First look Media. The team used social media and digital forensic tools to cover breaking news stories around the world. In 2015, Reported.ly was recognised for its groundbreaking use of social media to cover the Charlie Hebdo terrorist attack in Paris with a Online Journalism Award.

“There was no way I would have been able to do what I did back then if I hadn’t built up a baseline level of trust among my online communities,” Carvin said of his reporting during the Arab Spring.

“The ways I interacted with the public and the way I embrace certain aspects of personal transparency aren’t necessarily in the traditional norms of journalism,” he added.

“But in order for me to develop that level of trust, I couldn’t hide behind a standards and practice book. Establishing trust raises some pretty tough questions about journalism ethics and transparency.”

In his talk, Carvin will explore how the Internet has created new opportunities for public understanding while also sowing the seeds of mistrust and confusion. When all is said and done, what will it take for trust — in journalism, in society, and in ourselves — to come out on top?

“People who mistrust news organization aren’t going to spend a moment of time reading their ethics policies for journalists. So, what are the ways either the news outlet or its staff can leverage more transparency and more self reflection in a public way, so some people at least will start to take them more seriously?” Carvin asked.

Professor Carvin’s talk will take place at 7 p.m. on October 24, 2018 in the HSBC Room at UBC’s Robson Square in downtown Vancouver. Please RSVP by October 17th, 2018.