UBC Journalism professor Candis Callison has been elected to the American Academy of Arts and Sciences, one of the oldest and most prestigious learned societies in the United States. 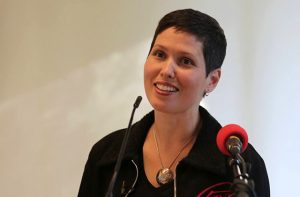 She is among more than 200 leaders in academia, the arts, business, government and public affairs elected this year. Alongside Dr. Callison, this year’s class includes gender theorist Judith Butler, journalist James M. Fallows, and the former First Lady Michelle Obama.

“The honour is well deserved recognition of Dr. Callison’s work as an outstanding scholar whose research and teaching spans the areas of environment, journalism, and media studies,” said Dr. Alfred Hermida, director of UBC Journalism.

“She is at the forefront of the study of the role of social movements in public discourse, through the lens of science and technology, anthropology, and Indigenous studies.”

Her 2014 book, How Climate Change Comes to Matter: The Communal Life of Facts (Duke University Press), has been described by reviewers as providing “fascinating insight into why after decades of climate change debate there remains a paralysing hesitancy and complexity around what it means and what we should do about it”, offering “a magisterial treatment of the deep roots of contention in this momentous and unfolding story.”

Dr. Callison is currently on leave as the Pathy Distinguished Visitor in Canadian Studies at Princeton University until June 2019.

The American academy was founded in 1780 by John Adams, John Hancock, and others who believed the newly forming United States should honour exceptional individuals, and also engage and support them in their pursuit of advancing the public good.

“One of the reasons to honor extraordinary achievement is because the pursuit of excellence is so often accompanied by disappointment and self-doubt,” said David W. Oxtoby, President of the American Academy of Arts and Sciences, in a media release.

“With the election of these members, the Academy upholds the ideals of research and scholarship, creativity and imagination, intellectual exchange and civil discourse, and the relentless pursuit of knowledge in all its forms,” said President Oxtoby.

The elected members join together in interdisciplinary efforts to produce independent studies that inform public policy.

The newly elected members will be formally welcomed into the academy at a ceremony in Cambridge, Massachusetts in October.