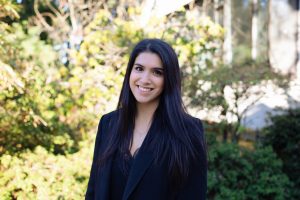 Second-year student Jasmine Mani has been awarded with the 2020 Joan Donaldson CBC News scholarship, a paid four-month internship considered one of the most prestigious to Canadian journalism students.

Nine other students from journalism programs across Canada were awarded the scholarship this year.

Journalists awarded the Joan Donaldson scholarship get hands-on experience in all areas of multi-platform news, including digital, radio and television. They can work behind the scenes, on air, or both.

Mani will be working full-time for CBC News in the summer in the Vancouver and Toronto newsrooms.

“Having already worked in a few different areas at the CBC, I’m now even more excited to meet and work with more of their talented producers and reporters,” Mani said.

She has worked for CBC previously on their flagship program, The National, during her internship in 2019. She was hired thereafter by the public broadcaster as an associate producer as a casual employee, working at the Investigative Unit for Diana Swain to research hate crimes in Canada. She continued to work in the Toronto newsroom, then freelanced at the CBC News Vancouver newsroom during her last year in the School.

Mani will start work at the CBC Vancouver newsroom doing radio, TV, and web on local stories. She will then head to CBC Toronto to work at Here and Now, a daily radio show hosted by Gill Deacon. She will end her time at the podcast Front Burner hosted by Jayme Poisson, also in Toronto.

“I haven’t had the chance to work in radio before, so I’m really excited to dive into audio storytelling,” said Mani who graduated from the University of Western Ontario in 2017 with a degree in the Media, Information, and Technoculture program.

During her time at the School, Mani has written about LGBTQ+ issues, sexual misconduct in fraternities, and the gender imbalance in Canadian university coaching. She also co-produced a video story with Carol Eugene Park documenting the lived experiences of young people of mixed race, which won a silver Canadian Online Publishing Award.

“They ended up delivering a beautiful piece that was really powerful. That’s sort of emblematic of the way she’s been in the program. She knows what she wants and always has big ideas,” said senior instructor and internship coordinator Kathryn Gretsinger.

The Donaldson scholarship is a way to “get the door open,” said Gretsinger. “That title resonates with people inside. They get it goes to the top students.”

The Joan Donaldson scholarship was founded in 1999 in recognition of Joan Donaldson, the founder of CBC Newsworld, now the CBC News Network.

“I was a student when I worked for her. She was so committed to young women journalists, to high public service journalism,” said Gretsinger.

“She taught me to trust my gut and work harder than anyone else. And understand the importance of the work I was doing.”

Recipients are chosen based on their academic performance and commitment to public service journalism. Last year, UBC Journalism alum Ryan Patrick Jones received the scholarship, and now works as a web and radio reporter for CBC Ottawa.