Second-year UBC School of Journalism student Lauren Kaljur has been awarded a prestigious News21 fellowship for 2017. 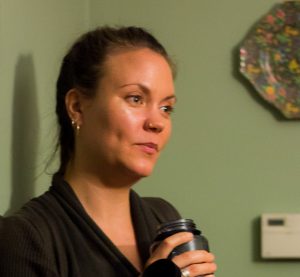 She will join 19 other journalism students from across the U.S., Canada and Ireland, along with 10 students from the Walter Cronkite School of Journalism and Mass Communication at Arizona State University.  They are going to report and produce an in-depth, multimedia project on water pollution and its impact on health  in the U.S.

The students are already taking part in an online seminar lead by Professor Leonard Downie Jr., former executive editor and vice president of The Washington Post and Cronkite’s Weil Family Professor of Journalism and News21 Executive Editor Jacquee Petchel, a Pulitzer-winning journalist and former senior editor for investigation and enterprise at the Houston Chronicle.

The seminar is followed by a paid summer immersive reporting experience where they will travel the U.S. to examine key issues surrounding water pollution, including contamination sources, legislation, enforcement and health concerns.

UBC is the only journalism school in Canada whose students have received the fellowship. Kaljur is the fourth UBC Journalism student participating in News21.

“I applied to the fellowship because I believe collaborative journalism projects are the way forward in tackling the big issues of today,” said Kaljur.

This year’s News21 project will focus on water – water shortages, water quality, water contamination, the politics of water. The reporting project will look at how other countries, including Canada, are handling this issue.

“Connecting with people across North America that struggle with the most basic human right to water will be a great privilege. If I can help shape a narrative that causes people to pause and think, “That could be me,” I will consider my efforts a success.” Kaljur said.

“As practices and norms in journalism continue to find their footing, I look forward to discovering where other fellows see challenges, opportunities and techniques for meeting them.”

In previous years News21 fellows have had their stories receive widespread recognition, published on NBC.com and The Washington Post among other publications.

“It’s an incredible opportunity for students to work in the U.S. with a well-resourced team of reporters and experienced editors,” said Lakusiak. “Professionally, News21 was a giant step forward for me and it allowed me to produce a major project I’m really proud of.”

Previous recipients of the fellowship have produced stories investigating marijuana legalization and gun laws in America.

Emi Sasagawa, UBC’s 2015 recipient, went on to have her report “Marijuana in Alaska has long been legal. Now the state is struggling to regulate it.” published in the Washington Post.