Ten UBC Journalism students are travelling across the world to investigate the global supply of seafood. The students are in West Africa, Peru, Hong Kong and China with professors Peter Klein and Daniel McKinney, as well as alumna Britney Dennison, as part of the School’s International Reporting course. 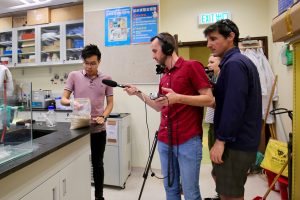 Each year, students in the competitive-entry course research and produce stories on an underreported global issue. This year, they are investigating the seafood supply chain worldwide.

The aim of the partnerships is to challenge the conventional model of parachute journalism by facilitating relationship building.

“As journalists entering a new territory, we’re guests in the lives of the people who will become the sources and faces of our stories,” Sheikh said.

“I want to see how successfully I can apply these learnings outside the classroom and outside the North American context.”

“I feel a step closer to living my dream as a high school kid — to become a foreign correspondent,” he added.

A team of three is also travelling to Peru, where the anchovy fishery has yielded the largest single species catches in the world.

“You never really understand your story or your subjects until you’re on the ground with them,” said Peru team member Rithika Shenoy.

“I’m fortunate to being going to a completely new place, where I’m not familiar with the language, culture, or anything. As a professional, I’m going to be faced with many such situations, so I’m glad to have this experience while still in school.”

Once they’re back, the students will spend the next term at the School working on multimedia stories. Since 2009, international reporting student projects have been published by major media partners including The New York Times, CBS News, PBS FRONTLINE, CBC, VICE News, Al Jazeera, The Globe and Mail and Toronto Star, and have won many awards, including an Emmy for Best Investigative Magazine.