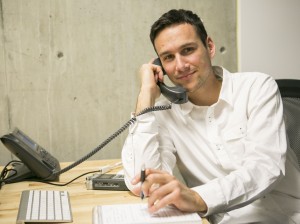 Second-year UBC School of Journalism student Mike Lakusiak has been awarded a prestigious News21 fellowship for 2016.

UBC is the only journalism school in Canada whose students have received the fellowship. Lakusiak is the third UBC Journalism student participating in News21.

The program is run out of the Walter Cronkite School of Journalism and Mass Communication at Arizona State University in the U.S. Fellows in the program will spend the spring semester participating in a virtual seminar.

The seminar is followed by a summer immersive reporting experience where they will travel the country and report and produce their in-depth, multimedia stories.

“It’s a huge opportunity at this stage in my career,” Lakusiak said. “I’m looking forward to working with some of the best early-career journalists and the industry experts at the Cronkite School.”

Previous recipients for this fellowship were Emi Sasagawa and Allison Griner.  Sasagawa was the 2015 receipient and went on to report and produce stories on the project “America’s Weed Rush”, an investigation of marijuana legalization in America.

Sawagawa’s report “Marijuana in Alaska has long been legal. Now the state is struggling to regulate it.” was published in the Washington Post.

“The participation of UBC Journalism in News21 reflects the professional calibre of our students,” said School director Alfred Hermida. “I am confident Mike will be able to make an invaluable contribution to this year’s project.”

The 2016 project focuses on the topic of voter access and participation in a national election year, and will be lead by News21 Executive Editor Jacqueline Petchel, a Pulitzer Prize-winning investigative journalist.

“The topic is one that’s incredibly important and I’m looking forward to be able to tell stories of people who may not always have a voice,” said Lakusiak.

“In this field, you need to take any opportunity in front of you. Why I felt so strongly in applying for News21 in the first place was the chance to work with leaders in the field and continue to hone my skills.”

“It’s a very high profile fellowship and I’m looking forward to being able to present my work to a wider audience,” he added.

In addition to his studies as a UBC Journalism student, Lakusiak is the Digital Media Coordinator for the school, an Associate Producer on CBC Radio BC’s current affairs programs, and is collaborating on a research project with faculty member Taylor Owen on news innovation in Canada.