The scholarship is among the most coveted and highly competitive for graduate students. Last year, SSHRC awarded 1,268 scholarships across Canada, 95 of which went to students at UBC. 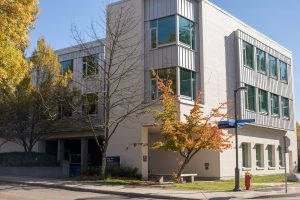 Jamuna Galay-Tamang’s project focuses on Warriors Against Violence, an Indigenous-led group that uses a decolonization approach to support men who have a history of violence.

“The project will examine violence against women in Indigenous communities and the impact of trauma passed down through generations as a result of colonization,” said Galay-Tamang. Her research is being supervised by UBC Journalism professor Mary-Lynn Young and professor Minelle Mahtani, who serves as senior advisor to UBC’s provost on racialized faculty.

Lauren Donnelly, who has a background in acting, is digging into gender and film criticism in Canada. She is being supervised primarily by adjunct professor David Beers.

“Film criticism tells us what’s good, what’s important, and contextualizes cinema within the cultural zeitgeist,” she said. “My feature profiles Canadian female film critics, and how they’re holding their own and making their own space in what’s very much still a boys’ club.”

Examining the ‘training grounds for Canada’s next generation of journalists’

Melanie Woods is researching campus press in Canada, with the goal of producing a documentary podcast exploring how campus press fits into the Canadian media landscape.

“Student journalism is so much more than many people give it credit for,” Woods said. “Many student papers are running six-figure annual budgets and regularly publishing work picked up by local, national and international outlets. They are also the training grounds for Canada’s next generation of journalists.”

Woods brings significant personal experience and expertise to her research. She served as editor-in-chief of The Gauntlet at the University of Calgary and worked at the campus radio station CJSW. UBC Journalism professor Kathryn Gretsinger is supervising Woods’ work.

Women and winemaking in Georgia

Prior to coming to UBC Journalism, David Kitai spent a year working as a sommelier in the country of Georgia. With funding from SSHRC, Kitai’s research will take him back there during his final term at UBC.

“I’ll be exploring how women winemakers have played a significant part in restoring an eight-thousand year old winemaking tradition while occupying a non-traditional role in a deeply patriarchal society,” Kitai explained. He’s being supervised primarily by Young and secondarily by Professor Anne Gorsuch at UBC’s department of history.

Erin Ward’s research will trace the emergence of scientific consensus as a rhetorical device and consider its role in public mistrust of particular areas, including climate change and vaccine safety.

This year’s UBC Journalism recipients join an impressive group of students who have received SSHRC funding in recent years, including 2018 graduates Alex Migdal and Anya Zoledziowski.

If you are prospective student and you’re interested in learning more about the SSHRC application process at UBC Journalism, please contact jrnl.journal@ubc.ca.