The UBC Journalism community had a strong showing at awards honouring excellence in journalism in Canada, including the Radio Television Digital News Association regional awards, the Canadian Association of Journalists awards, and the student journalism, Emerge Media Awards. 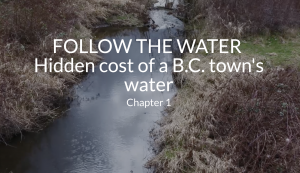 At the RTDNA Awards of Excellence (West region), alumna Joanne Pearce (‘18) took home the digital media award (large market). Her winning multimedia project, Follow the Water: Hidden cost of a B.C. town’s water, digs deeply into the pressures faced by the Township of Langley’s water supply. The project goes forward to be a finalist in the national RTDNA awards.

Other UBC alumni were recognized at the RTDNAs for their contributions to stories produced by CBC News and Radio.

Last summer, graduating student Brenna Owen worked on the Tracking Trans Mountain database produced in a collaboration between The Discourse, APTN, and HuffPost Canada. The project is a finalist in the RTDNA network awards for data storytelling.

CBC journalist Tamara Baluja, who spent a term of teaching and research at the School of Journalism as the recipient of the the prestigious Michener-Deacon Fellowship for Journalism Education, was also a winner in the regional RTDNA awards. She took the award for excellence in social media in the Western region for her news interactive story Walking a Mile in Their Combat Shoes. The project now goes forward to be considered for a national RTDNA award.

The Conversation Canada, co-founded by professors Mary-Lynn Young and Alfred Hermida, is up for a network RTDNA award. It is nominated for the Adrienne Clarkson Award for Diversity award in digital. Winners of the national and network awards will be announced at the RTDNA Canada 2019 National Conference & Awards Gala, May 10-11 in Toronto.

Several UBC Journalism alumni are also recognized as 2018 finalists for the CAJ annual awards. Alumna Katie Hyslop was nominated alongside journalist Paul Willcocks for the APTN/CAJ Reconciliation Award for their portfolio on child welfare reporting at The Tyee.

The Price of Oil series is a finalist in the Open Media category. Alumna Lauren Kaljur supported the project as a student researcher and reporter as part of the Institute for Investigative Journalism based at Concordia University.

Alumna Laura Kane and Aleksandra Sagan are nominated in the same category for Contagion: Edging closer to a world without antibiotics, for The Canadian Press.

In the Scoop category, alumna Enza Uda is part of the CBC News Go Public team who is nominated for Telling on Telcoms.

UBC’s International Reporting Program’s 2018 Stuck project was recognized by CAJ as a finalist in the category for human rights reporting, in collaboration with HuffPost Canada. The winners in each category will be announced on May 4 at the CAJ awards gala in Winnipeg.

At the Emerge Media Awards, Stuck also took first place in multimedia production. Stuck follows the journeys of migrants throughout Turkey’s two-tiered immigration process, delving into the challenges non-Syrians face as they try to start new lives in Europe.

Three other projects involving UBC students alumni were finalists in the category: the article Finding a Solution to Canada’s Indigenous Water Crisis, produced in a collaboration between BBC News and the Global Reporting Centre at UBC, as well as More than Words, a series about Indigenous language revitalization produced by members of UBC’s Reporting in Indigenous Communities course. Brenna Owen’s story as part of the More than Words series was also a finalist in the category.

Graduating students Jonathan Ventura and Annie Rueter placed second in the videography category for their video about citizens responding to the opioid crisis in Vancouver’s Downtown Eastside. Alumna Alex de Boer and graduating student Ryan Patrick Jones were finalists in audio storytelling. Jones was also recognized as a finalist alongside Kallan Lyons for the written word.