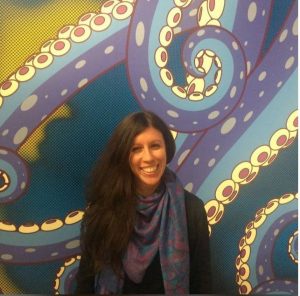 Valentina Ruiz Leotaud graduated from UBC Journalism in 2015 and currently works as a communications officer for the Sea Around Us initiative, largely working on media outreach for the project’s research.

During her time at the school, Ruiz Leotaud reported extensively on the mental health of marginalized populations — both locally and abroad. She covered a support group in the Downtown Eastside working to educate men about physical and mental health, traveled to Jordan with the International Reporting Program to report on the trauma experienced by Syrian refugee children, and completed a final research project investigating if Canada was doing enough to address the mental health of immigrants.

I wanted to pursue graduate studies in journalism and I have family in Ontario, so I started looking at programs in Canada. Then, I saw the IRP component of the UBC program. That, and the video module of Integrated Journalism (IJ) coupled with the fact that the school was embracing social media as well, made me decide that UBC was more interesting and more aligned with what I wanted to do.

What stands out from your time as a student?

We were in the video module in IJ, and I did a project on a program called the Dude’s Club. It’s a program in Vancouver’s Downtown Eastside that brings marginalized men to learn about health, healthcare, and basically what they can do to stay healthy in their context. It was a weekly gathering of men held at the Vancouver Native Health Clinic. There was a doctor who explained different things such as cardiovascular health, reproductive health, and so on. They all shared a meal and sometimes would watch sports. It basically gave them the opportunity to connect and learn and to have kind of a homey environment — at least for a little bit.

And here I was, a woman — and I’m tiny — and I have an accent, and I was by myself interviewing all these men. I did three videos on that, and interestingly, after we published them on The Thunderbird, Global [News] did a piece on the Dude’s Club as well.

I also went to Jordan and I worked on a project about mental health. Specifically, the project I was part of was on refugee mental health. We ended up focusing on children who had arrived in the country at the peak of the Syrian refugee crisis. And my final research project was kind of connected [to IRP] as it was on the mental health of underemployed immigrants in Canada.

I’ve always been interested in projects like these. I studied journalism in my undergrad and covered topics such as male prostitution or the urban barriers that visually impaired people have to deal with in developing countries.

What did you do after graduation?

I did my internship at the Vancouver Observer/National Observer and did a lot of social media for them. As part of Alf [Hermida’s] class [Decoding Social Media], we had to partner with a media outlet and develop a social media strategy for them so after I graduated. They wanted me to continue managing their social media. I stayed with them until 2016.

And now what I do at the Sea Around Us is PR, which these days includes social media and employing storytelling techniques. Since I already had a journalism background, one of my biggest learnings at UBC was how to do this in a North American context. I’m also using the tools that I learned in the video course and I’m thinking about doing some podcasting as well.

What would you say to a much younger Valentina who had not entered journalism or communications yet?

Embrace the edits. That’s what’s going to make a better text. Sometimes, especially when you’re younger, your ego doesn’t let you see that your editor wants to make the reader’s life easier. And so that’s what they’re doing when they’re cutting up your text. Don’t take it personally. These days, I appreciate that way more than I did at the beginning.

I also think more about being really specific about what you want to report on. I remember, for example with my thesis, I wanted to cover every single aspect of the topic. That’s just impossible.

And now, I have to be very specific with the points I extract from scientific papers, think about the message I want to convey and just focus on that so that the knowledge translation is effective. Thinking back, my life would have been so much easier if I just focussed on one single aspect of a reporting topic.